This is a tricky post to write (several years after our trip to Thailand) because it describes a day Rob and I had interacting with the elephants at the Maetamann Elephant Camp - but it is a day we would not choose to repeat because of what we have learned about the care and treatment of elephants.  It WAS a fun day, and I have mixed feelings about even posting it, because I want to preserve our own happy memories of the day, but I don't want this post to encourage others to take part in this activity.  Let me put it this way.  It was a wonderful day for the humans, but probably NOT so much for the elephants.  I have learned more about the sometimes cruel treatment required to get these enormous creatures to be docile enough to interact safely with humans.  So this post will share what I wrote in my journal immediately following the visit, but it will end with some links to information about ethical elephant care and sanctuaries that offer visitors the opportunity to have an elephant encounter that does not harm the elephant.

Chiang Mai is the city of elephants. Decorative carved elephants of every shape and size are found everywhere in the city... and this elephant connection led to one of the best days of the entire trip!  The weather was PERFECT…sunny blue skies with mild temperatures…ideal for our itinerary - riding elephants through a gorgeous jungle, followed by floating down a river on bamboo rafts. We started out early so we could be among the first people in the Maetamann Elephant Camp, a large sanctuary for the Asian elephants that live in Thailand. There are only about 3,000 elephants left in the wild, but there were thousands of them used in the past for work, especially hauling timber. Thailand has banned the uncontrolled cutting of timber now, so many elephants could no longer be supported by the farmers who owned them, so the sanctuaries became a new homes for them. This one is huge, with many acres where tourists do not visit, so the elephants have some time just to be free in the jungle.

Our tour guide Yo was very knowledgeable about the lives of elephants, as her grandfather had been a mahout, or elephant keeper, and she was raised with a beloved family elephant. (When Yo's grandfather died, the elephant, who had lived with the family almost all of her life, died two weeks later of a broken heart. They had a burial for the elephant just as for a person.).

As soon as we arrived, we climbed aboard our elephant for our hour-long ride. Our mahout was very nice and spoke a little English, so we chatted throughout the ride. We rode on a seat between a triangular-shaped wooden framework, trying hard not to slip from side to side as the elephant lumbered along. But soon we got into the rhythm, and the ride was quite comfortable. The air was still cool and fresh - how unlike our first few days of the trip - and the jungle was deep green, with strong vines dripping from the trees. Along the path, we stopped at a raised stand to purchase bananas and sugar cane, and our elephant knew immediately to reach his trunk back to us to grab a bunch of bananas. He ate the entire bunch in one bite! When we turned around back toward the camp, our mahout took us down a very steep trail and we rode the rest of the way home right down the middle of the shallow river! So much fun!!!

Another big thrill came next…we got to feed a baby elephant goat's milk out of an enormous bottle. The greedy little thing knew what was coming and kept reaching out to anyone who had another bottle, drinking eagerly. My darling Rob was in seventh heaven…it brought out his most delighted smile. We were surrounded on all sides by elephants, large and small, and got to interact with several of them, sitting on their big knees or being raised up into the air.

Next was a demonstration by the mahouts and the elephants of the training process. The elephants piled up big logs, kicked soccer balls, spun hula hoops around their trunks, and even played harmonicas! For those of you worried that they should not be forced to "do tricks," I really got the sense that these elephants were so well cared for. There was no yelling or hard prodding. The mahouts worked consistently with the same small group of elephants, so they had a real relationship with them. 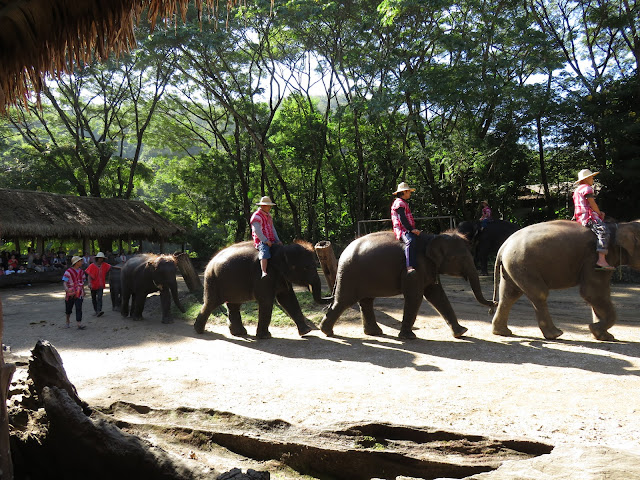 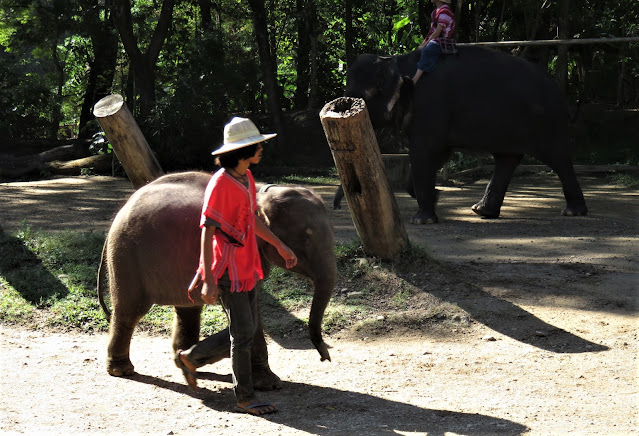 The crown jewels in the demonstration were the painting elephants. I had seen this before in a documentary, but I never thought I would see it with my own eyes. There were several elephants painting around the arena, and the one in front of us painted a picture of an elephant reaching up into a tree for a treat. Absolutely amazing! 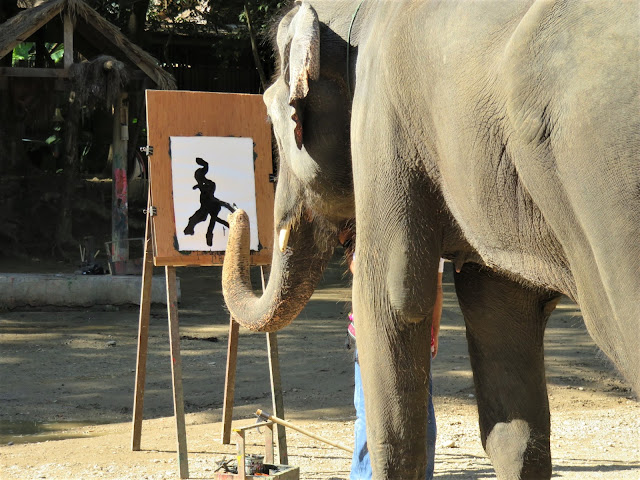 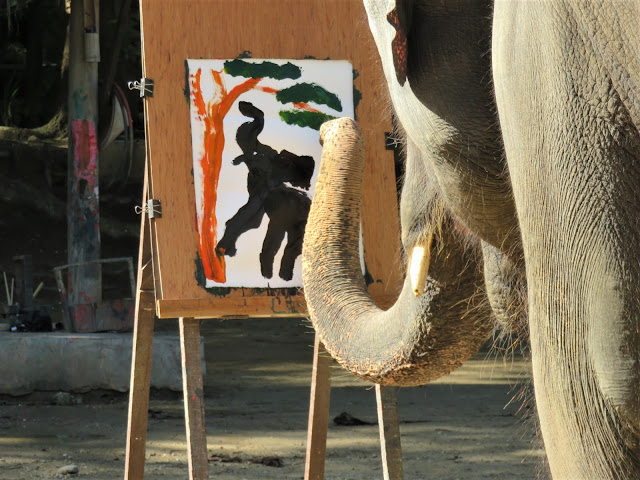 After the demonstration, we met with one mahout and his elephant…the very one whom had painting the picture. Yo had him tell us about his work (and his love for the elephants) and she translated for us as we asked questions about the animals and his work. 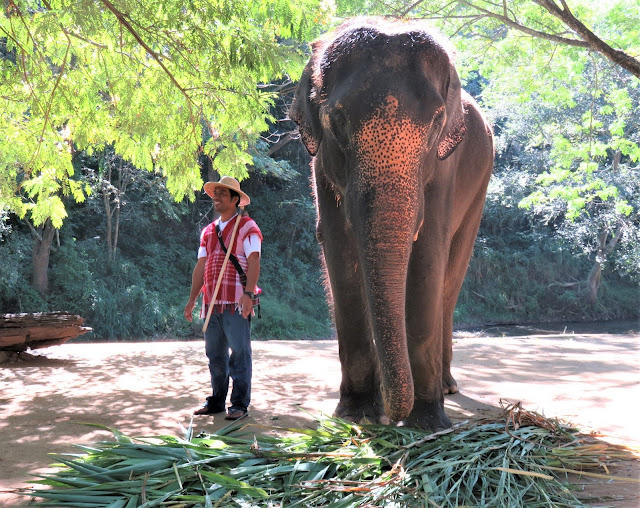 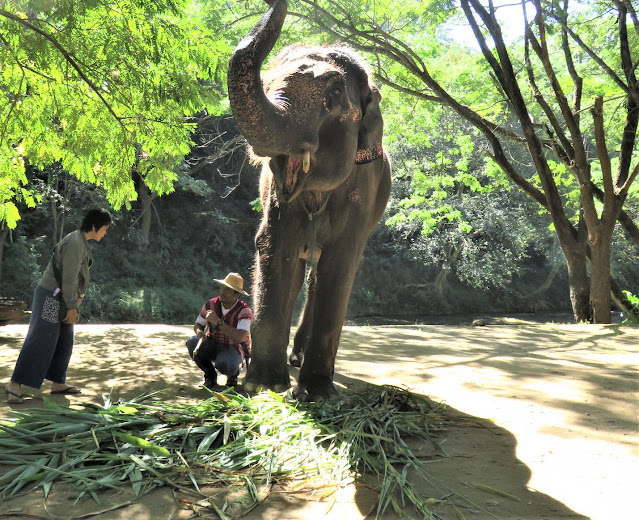 There was a little free time to browse around the grounds where we were surrounded by elephants everywhere we looked.  We ended the elephant portion of the visit with a very good lunch on a bamboo terrace overlooking the river. 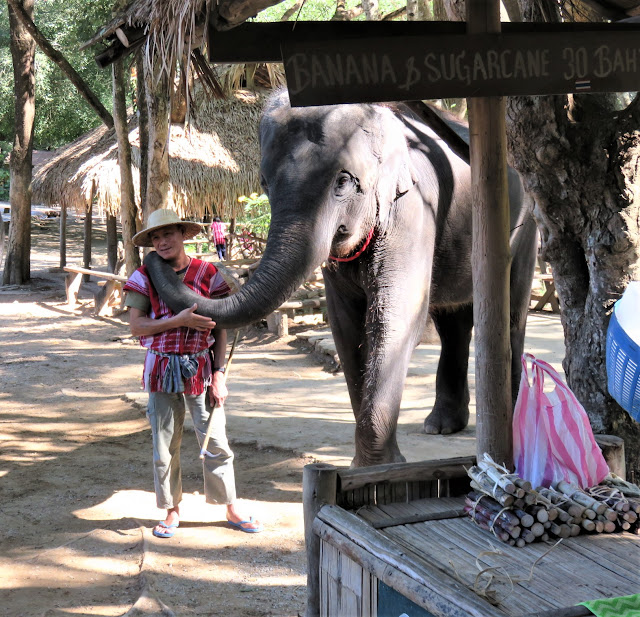 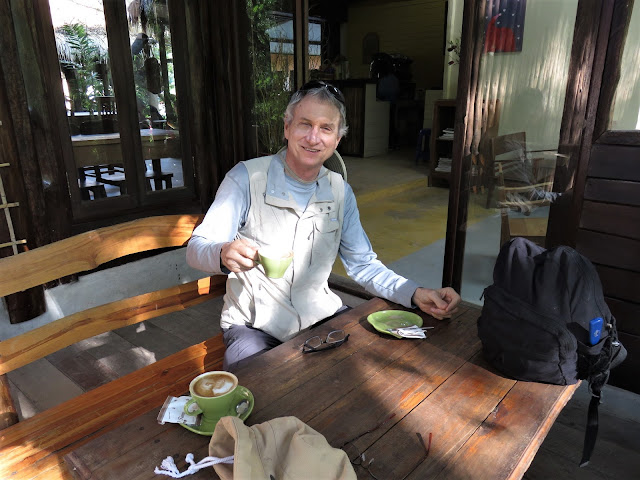 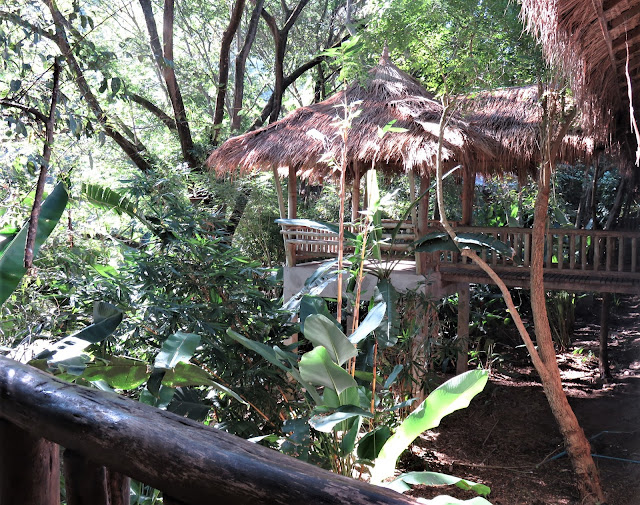 After lunch, we walked down to the water and four of us at a time climbed onto our bamboo rafts for a cruise down the Mae Ping River. We could see more elephants grazing in the bushes from time to time, with their mahouts sitting under trees keeping an eye on them. (We also encountered two water snakes swimming by, but our polemen slapped the water hard to keep them away from the raft.)


We returned to our lovely Park Hotel about 3:30 in the afternoon, tired but very happy - but the pleasures of the day were not over yet! Rob took a tuk-tuk to a fabulous restaurant, The Whole Earth, for some of the best food of our trip and finally ended the day being totally pampered at the massage parlor across the street from our hotel.  Rob had the ladies in giggles with his enthusiastic "Good good!" as they massaged his feet.  What a fun day! 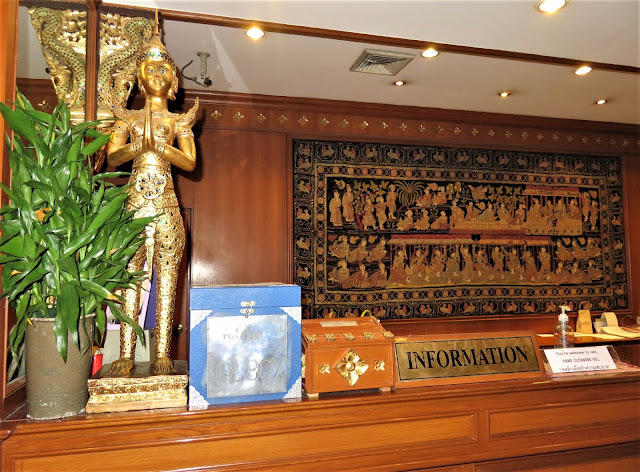 Afterward:  I think it is fair and important to emphasize that I did not personally witness any abuse or ill treatment of the elephants at the Maetamann Elephant Park.  The mahouts were pleasant and seemed to genuinely like the elephants under their charge.  But in the interest of promoting responsible travel, I am posting below links to articles I have found explaining why visiting "sanctuaries" that offer elephant rides and performances is no longer the choice I would make.  Happily for the traveler, there are also many excellent sanctuaries that allow visitors an up close encounter with the elephants without any worry of harm to these magnificent and intelligent creatures.

Why Elephant Riding Should Be Removed from Your Travel List

How Ethical is the Elephant Sanctuary You Are Visitng?