Thailand - Part 12: The Golden Triangle and the Hill Tribes of Thailand

The Golden Triangle and the Hill Tribes of Thailand
Friday, December 4, 2015 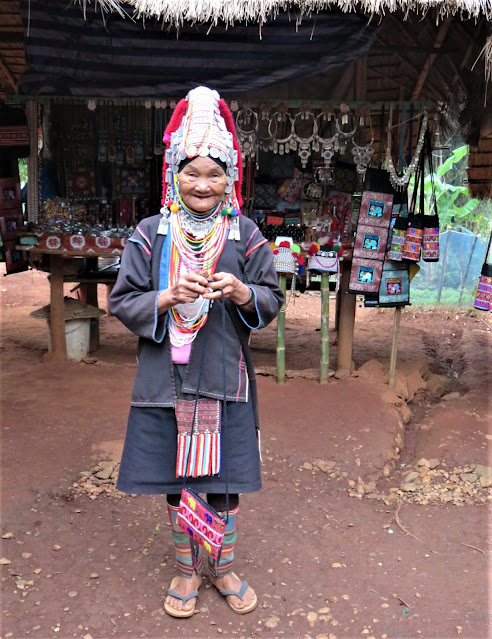 "The Golden Triangle" is the spot at the northern tip of Thailand where the Ruak River and the Mekong River meet and form the boundaries between Thailand, Myanmar, and Laos.  It sounds magical, doesn't it?  But we would learn today that these rivers also served as highways for drug smuggling.
We woke early and took the bus the short distance from Chiang Rai to the Golden Triangle where we climbed a long staircase, lined on either side by the serpentine bodies of two five-headed Naga serpents.  In Thai folklore, the Mekong River was said to have been created by two Naga kings slithering past and we had seen images of this dragon-like figure all over Thailand.
We made a quick stop at the "Crab Temple" (so named because of the carved crab figures at the base of the staircase).
Then we continued up more stairs through the forest to the lookout where we could see the Mekong and Ruak Rivers far below us. We were standing in Thailand which stretched out on the left, Myanmar was directly ahead, and on the right bank of the river was Laos. 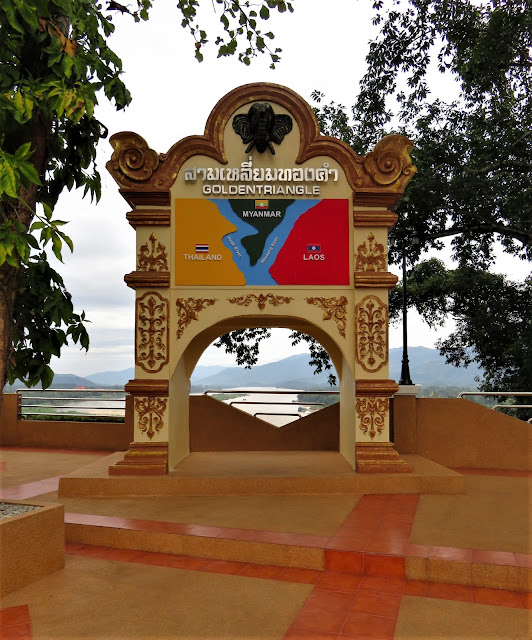 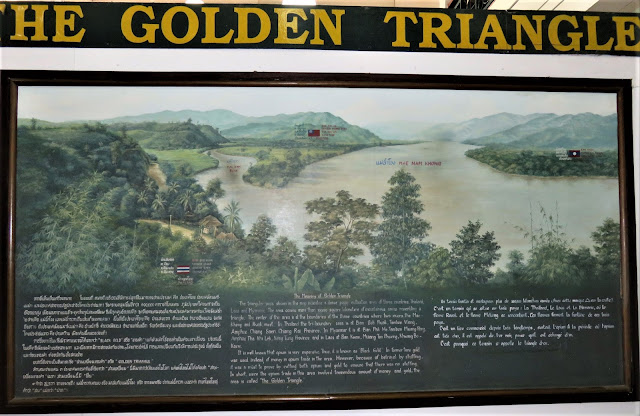 A sign at the top of this hill explained The Meaning of Golden Triangle like this:  "The triangular area show in the map indicates a dense poppy cultivation area of three countries - Thailand, Laos, and Myanmar.  The area covers more than 100,000 square kilometers of mountainous areas resembling a triangle.  The center of the area is at the boundaries of three countries where two rivers, the Mae Khong and Ruak, meet.  It is well known that opium is very expensive.  Thus, it is known as 'Black Gold.' In former times, gold was used instead of money in opium trade in the area.  However, because of betrayal by stuffing, it was a must to prove by cutting both opium and gold to ensure there was no stuffing.  In short, since the opium trade in the area involved tremendous amount of money and gold, the area is called 'The Golden Triangle.' "
After admiring the view from the hilltop, we descended the staircase again and visited the opium museum to learn more about the opium trade and the drug problems in Southeast Asia.  The museum was filled with decorative drug paraphernalia: opium pipes, scales, storage boxes.  Posters discussed both the history of the opium trade and the ongoing problems with addiction. 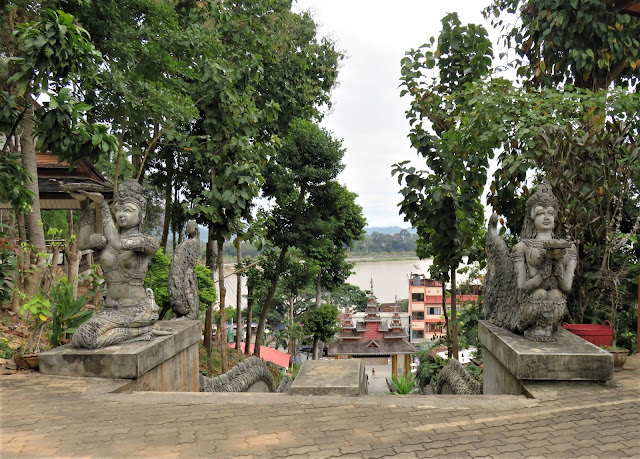 Just outside the museum was a street filled with golden towers and vendors selling tourist trinkets where we browsed a bit and got some snacks. 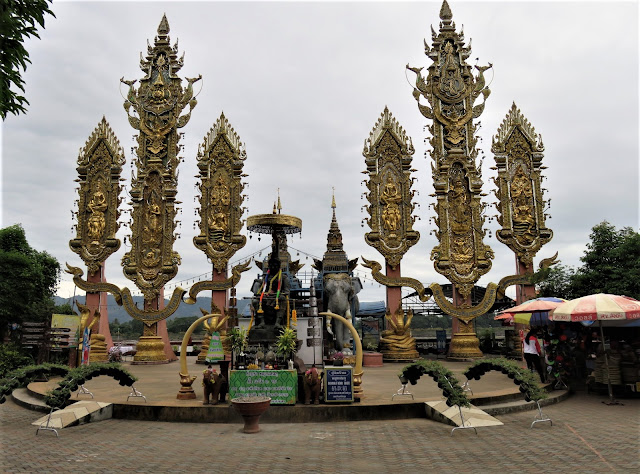 Then we boarded old farm trucks that had been converted into passenger vehicles and rode through a little village and past green hills and rice paddies to the farm where we ate a delicious lunch of barbequed fish, rice, and veggies with a banana-topped crepe drizzled with palm sugar for desert.


The farm visit was entertaining.  The grounds were decorated with colorful signs and quotes hanging on the trees and a hilarious "Happy Room" (bathroom) brightly painted with animals and plants. 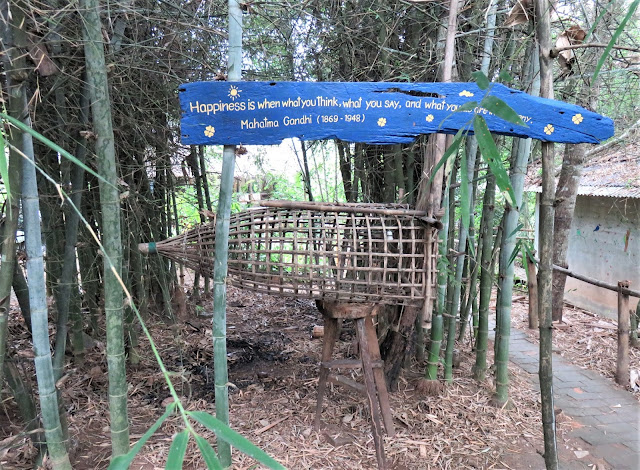 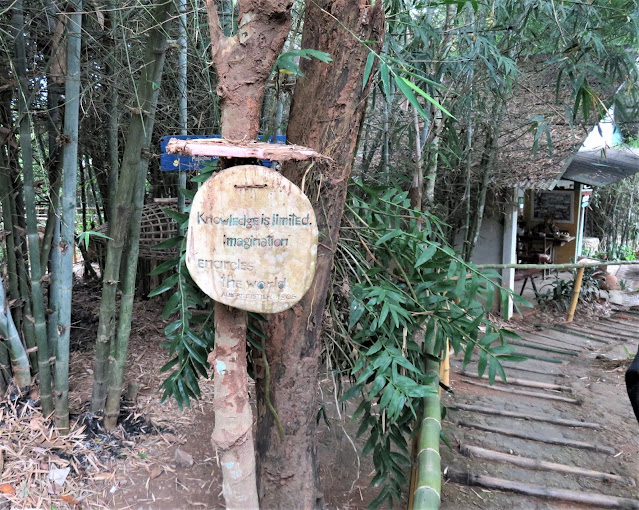 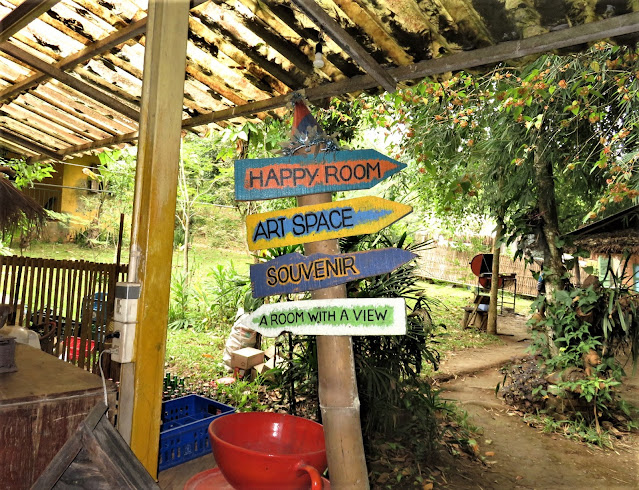 We returned to our beautiful hotel in Chiang Rai for a brief rest, driving past a funeral procession walking down the middle of the road.

Later that afternoon, we set out again for another of the highlights of the trip…a visit to a village populated by several "hill tribes," who had moved to Thailand from their original homes in other countries, including Laos, Myanmar, and Tibet. We entered the village past the farms and livestock sheds of the residents. 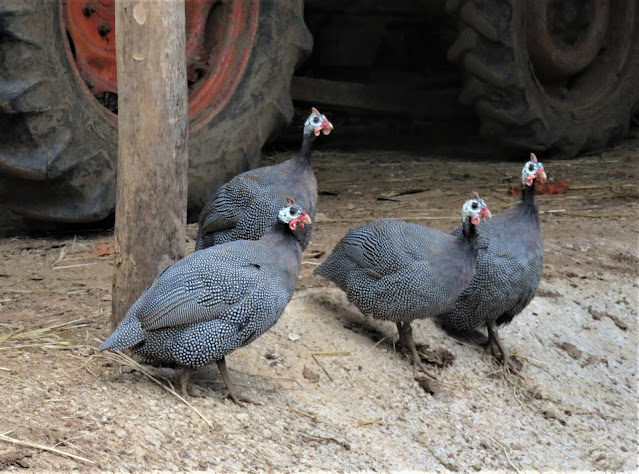 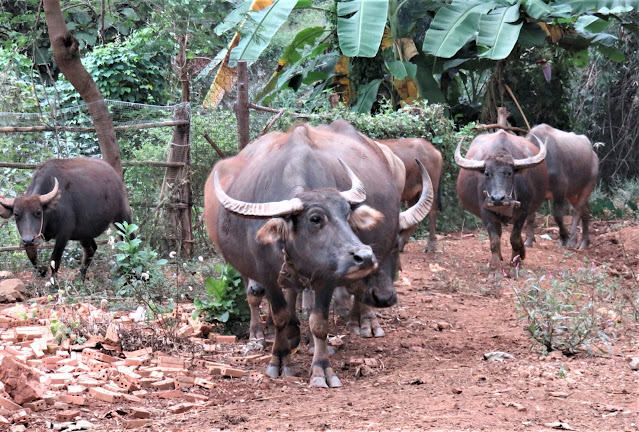 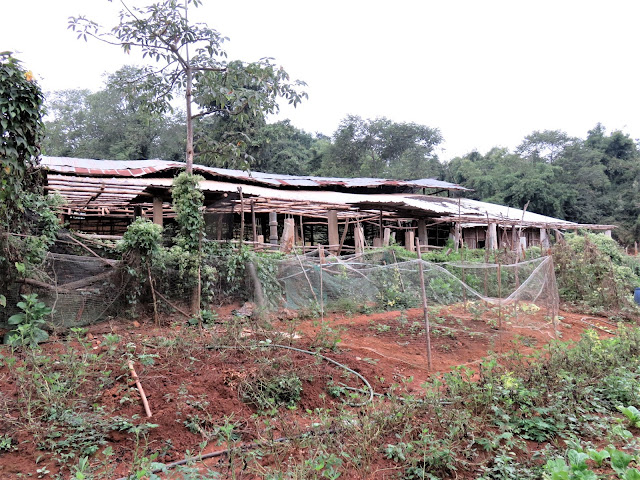 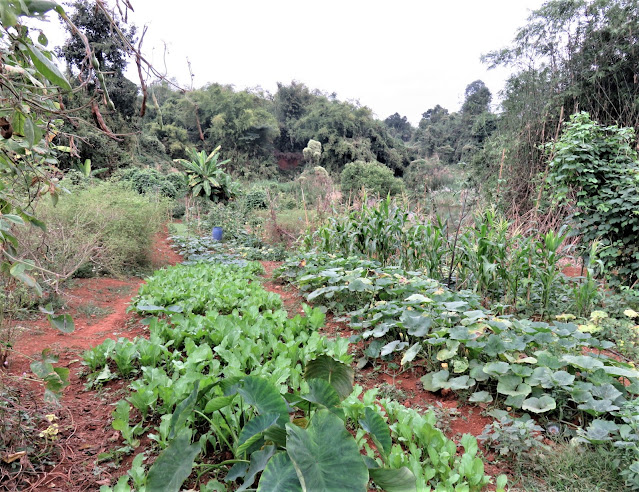 We first visited the Akha people.  This tribe originated in the Yunan section of China and from there, the Akha people spread to Myanmar.  The civil wars there drove many of them to seek shelter in Thailand.  These people are known for their elaborate headdresses and their intricate textiles.  Our guide Yo introduced us to some of the women of the village and we were able to purchase some of the villagers' lovely handcrafted items. 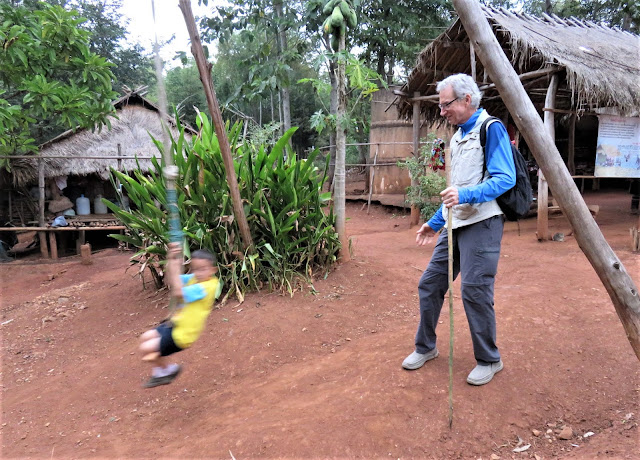 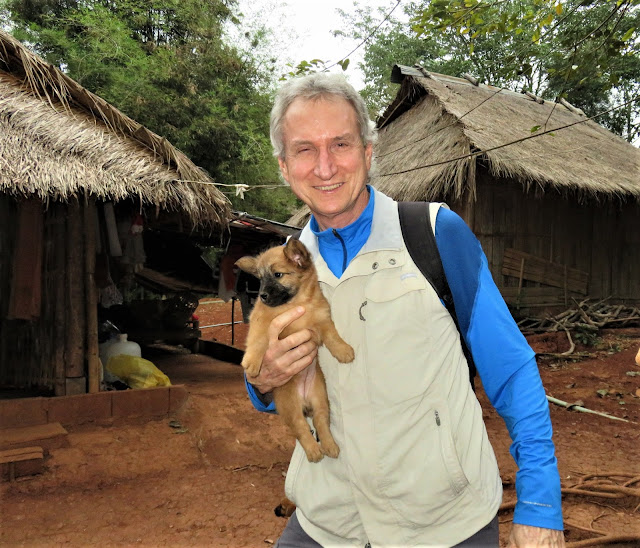 Nearby we visited the Yao tribe.  Also from China originally, the Yao spread into Laos, but after supporting America in the Laotian War, they were persecuted there and some migrated to safety in Thailand.

We spent the most time in the Kayan (or Karen) tribe's section of the village, the home of the "Long Neck" women. You have probably seen photos of these women who decorate their bodies with long ropes of bronze looped around their neck multiple times.  The Kayan people fled from Myanmar during the late 1980s and early 1990s because of the oppressive military regime.  They found refuge in northern Thailand.  I have mixed feelings about visiting "tourist villages," where the primary source of income seems to be creating crafts to sell to us.  I feel uncomfortable about invading the lives of these people, while at the same time enjoying learning about them.  The good news is that visits from tourists has allowed this village to become entirely self-sufficient.

The women were very sweet and gentle, and put up graciously with our snapping cameras.  Many of them were stunningly beautiful, and their unusual neckware really did not seem as bizarre as I had expected. Several of them had small children who were absolutely adorable.  I learned that the first rings are placed around the neck when a girl is about five years old.  Gradually more are added.  The rings do not actually stretch the neck.  Instead, they push down on the clavicle and compress the rib cage.  This may be done to enhance the femininity of the women, or perhaps to mimic the neck of a dragon, which is important in their folklore.  The older women feel that it is an important part of their culture, although some of the younger women are now choosing to have their rings removed to ease their transition into modern society. 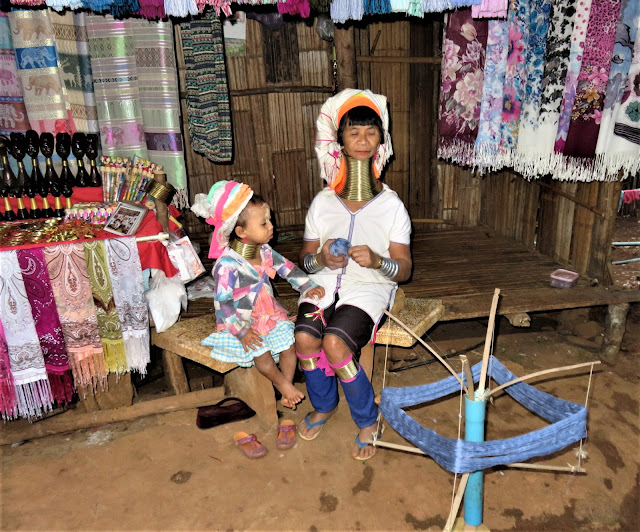 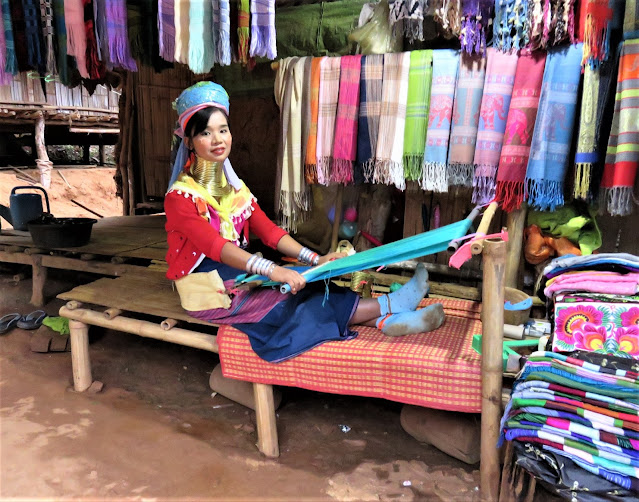 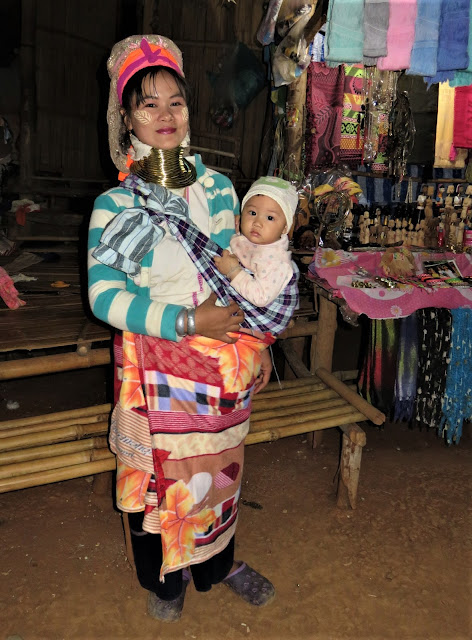 At dusk, the women of the village prepared our dinner, with sticky rice and minced pork steamed in banana leaf pouches, then entertained us with traditional dances. For the finale, they came out, took us by the hands, and led us out to join them in a dance. What a special cultural encounter! 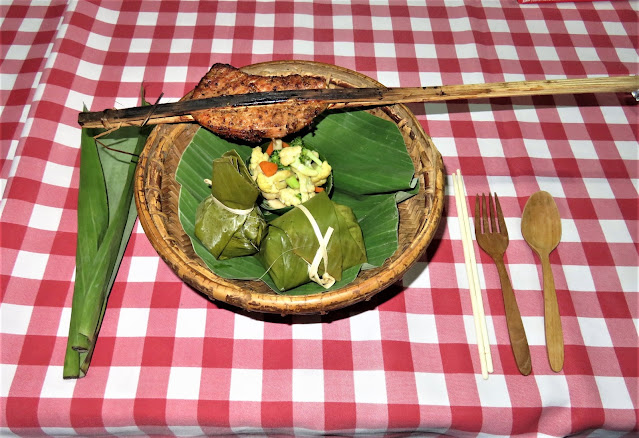 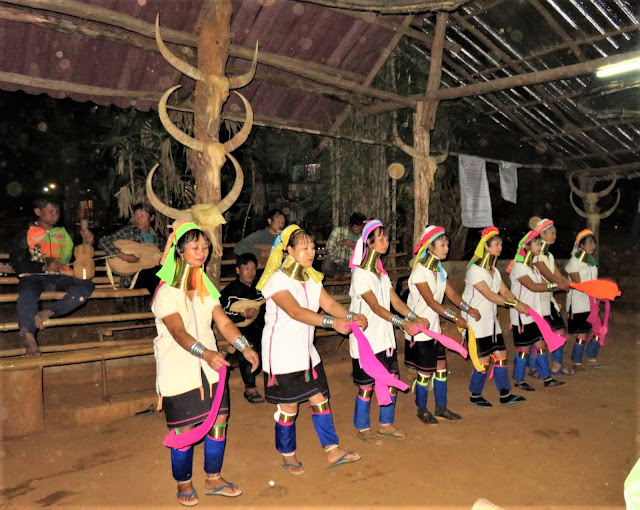 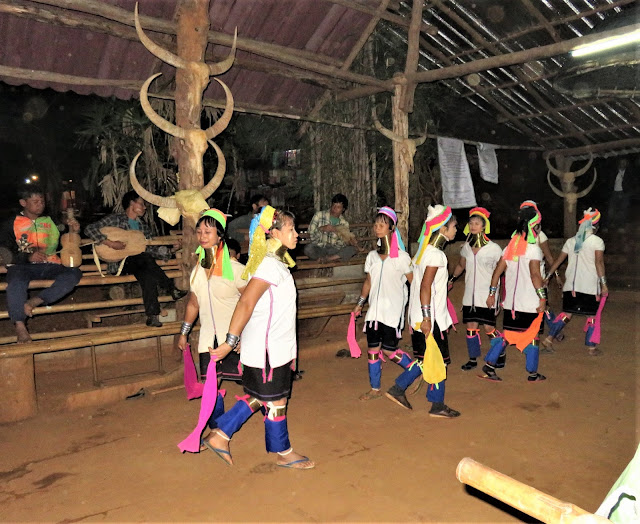 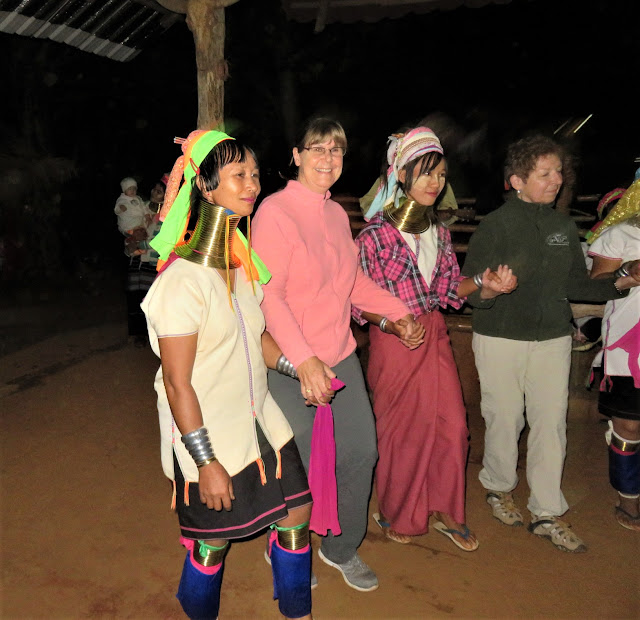 Amazing Joan You & Rob have seen so many wonderful places. I need the neck rings of the Karin Women 😂 ♥️

We have been so fortunate to get to travel all over the world....and there are still so many places to explore! I'd go for a couple of neck rings, but they are pretty heavy!