Thailand - Part 13: The White Temple and the Road to Chiang Mai

The White Temple and the Road to Chiang Mai

Just south of the Thai city of Chiang Rai lies one of the most fascinating - and fantastical - architectural structures in the world, Wat Rong Khun, or “The White Temple.” This compound of buildings displays the work of artist Chalermchai Kositpipat, who bought the crumbling old temple of Wat Rong Khun in the 1990s and began the project of rebuilding the temple and creating a center of learning for Buddhism and meditation.
There are several buildings throughout the park-like setting of green lawns and walking paths lined with hanging flower baskets, but the heart of the compound is the White Temple itself. This uboset, or Buddhist ordination and ceremonial temple, is a gleaming white and silver building sitting on a mound in the middle of a small lake. The temple incorporates traditional Thai architecture, such as the three-tiered roof and the wavy projections that shoot out from the corners and edges of the building - but some of these projections were created with elephant-dragons ;and other fantasy figures that looked a bit like illustrations from Dr. Seuss!  Every inch of the structure is covered with a frosting of white decorations that reminded me of an elaborate wedding cake. The bridge over the lake to the temple is guarded by two large scowling demons with raised clubs, as if warning the visitor to enter respectfully.

Like Sagrada Familia in Barcelona, this architectural project is still under construction, and may not be completed for many years, but we browsed through the many already completed buildings – small temples, classrooms, meditation areas. Some of these are much simpler in design than the uboset, but others are lavishly decorated with imaginative figures – winged rabbits, horses, and unicorns, as well as more familiar creatures from Buddhist mythology such as the Naga, the serpent deity, and the Kinnaree, a half human/half bird creature.

The most unexpected images were some masks of familiar characters from fantasy literature and movies hanging from some of the trees.

Almost all of these buildings were white, which to Mr. Kositpitat represents the mind. The only exception was the building containing the restrooms. It was bright gold and represents the body.
We explored the buildings and the grounds for about an hour. One workroom held some of the sculptures that would be placed on future buildings.

This was no ordinary day at the White Temple! We were fortunate to have arrived on the day of a rare event. The temple had just installed a new statue, and today was the ceremony to "open the eyes of Buddha."
All we visitors lined the main road to watch a long procession of men and women dressed in white marching slowly down the path to the sounds of Buddhist chanting and music.  Many were holding floral bouquets or tall banners, and one group carried a large flower-covered altar. 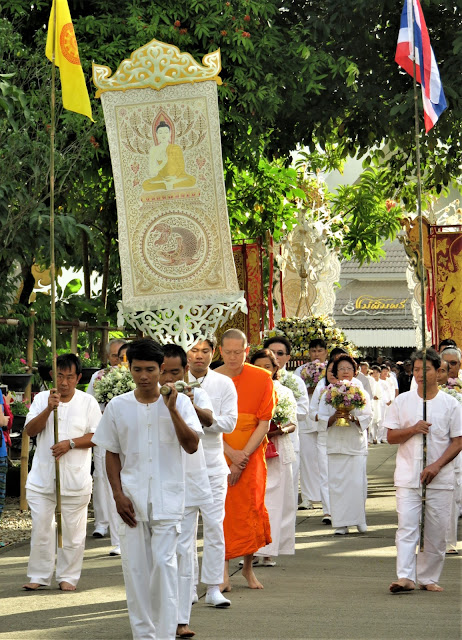 Once the procession passed, we hurried to the ceremonial area where a large cloth screen hid the statue of Buddha.  The floral offerings were laid on a table and a monk led chants.  The crowd was nearly silent and many held their hands in prayer and reverence, and the solemnity of the ceremony touched my heart. 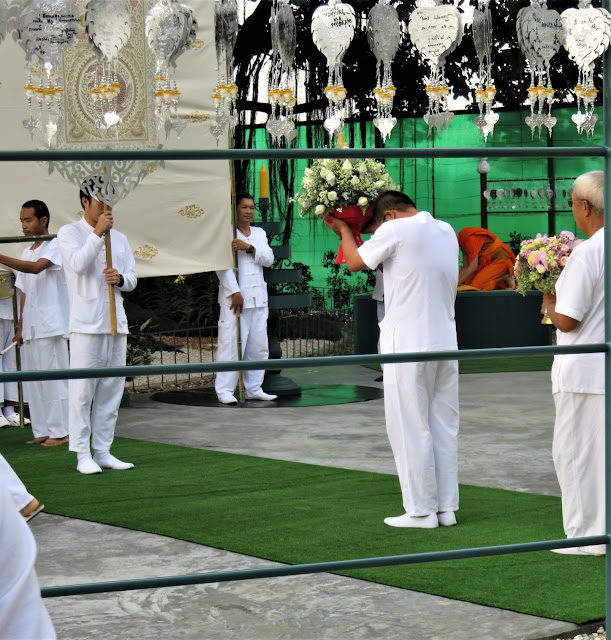 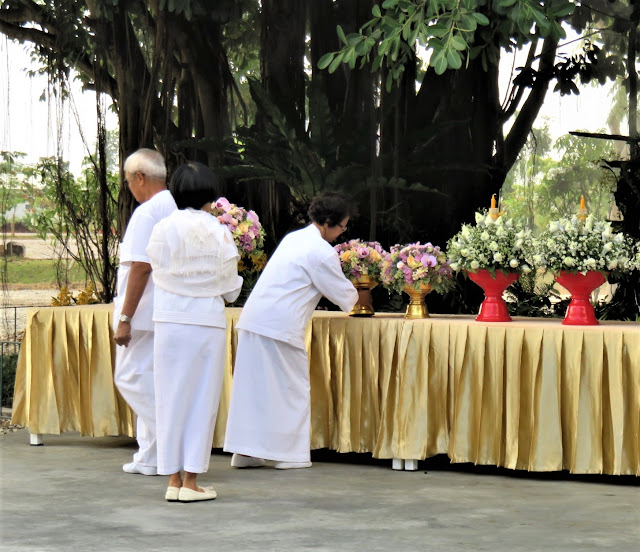 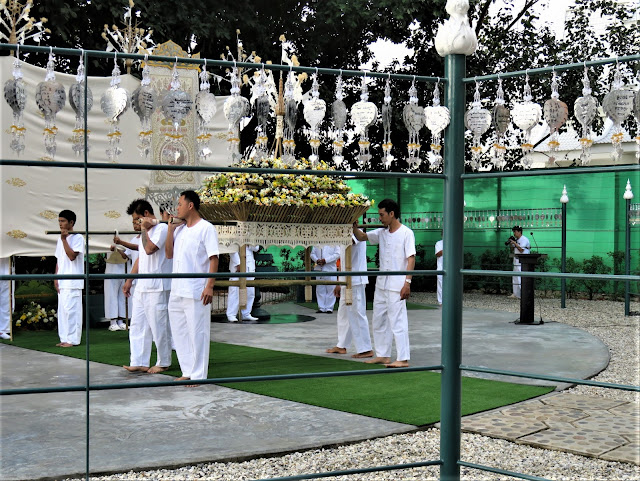 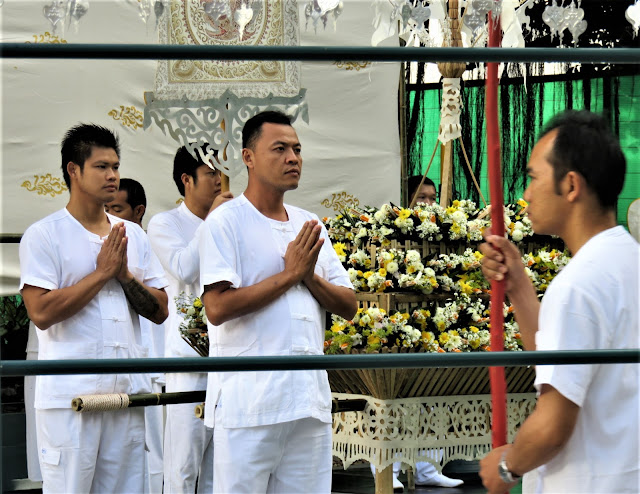 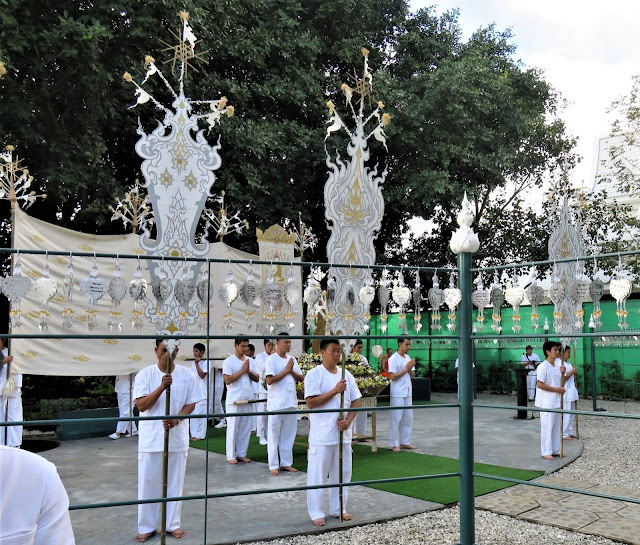 Several men now carried the screen away, thus opening Buddha's eyes. Chalermchai Kositpipat himself had led the procession, and he now lit the candles on each side of the altar, and offered his prayers, bowing to the ground in front of an orange-clad monk who was chanting throughout the ceremony. Then the people in the procession placed their floral offerings and lit joss sticks of incense in front of the statue. 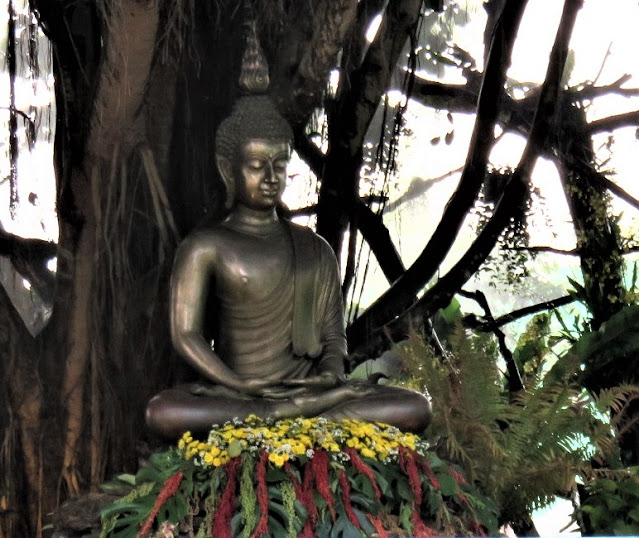 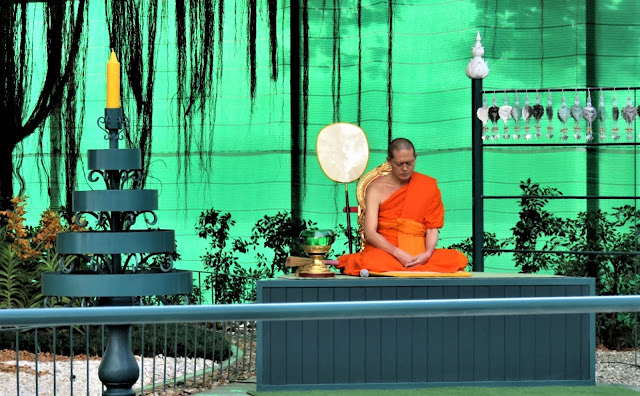 Here is a link to a short video of some of the highlights of the ceremony:  Opening the Eyes of Buddha
Yo had grown up in this Chiang Rai area, and Mr. Kositpipat was the uncle of her best friend, so following the ceremony, we had the honor of meeting him in person.
After our morning at Wat Rong Khun, we were on the road again, stopping for a few minutes to visit a rice factory. The farmers of the region bring their harvested rice to this site to be husked and packaged in huge sacks for shipping. We were all a little surprised by the look of the factory, which was not pristine and shiny like some I've seen before. Everything was covered with a deep layer of rice dust, and there were dust-encrusted spider webs everywhere. Chickens were happily pecking around in the big pile of rice husks. But the final product in the sacks looked shiny and clean, so I assume they know what they are doing! 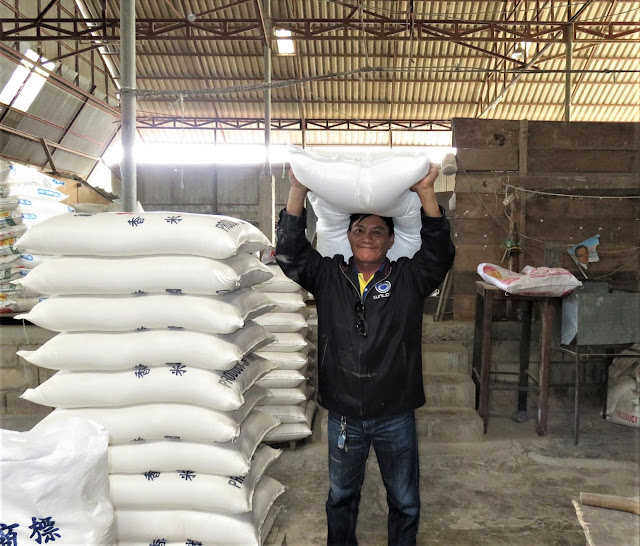 We continued on toward Chiang Mai, the second largest province of Thailand in terms of population. There is a huge difference between enormous Bangkok and Chiang Mai, though. The setting here is lush green hills and much smaller buildings, so the city center still feels more like a town than a city.
The morning ceremony was not the only special event of the day. Today was also King Rama IX's birthday, which was also Father's Day here, as he was considered the "father of the people." Along the road, we saw a number of bicyclists decked out in royal yellow in honor of their king.
We made one quick rest stop at another Cabbages and Condoms restaurant, where I declined the opportunity to buy some more bamboo worms to snack on. 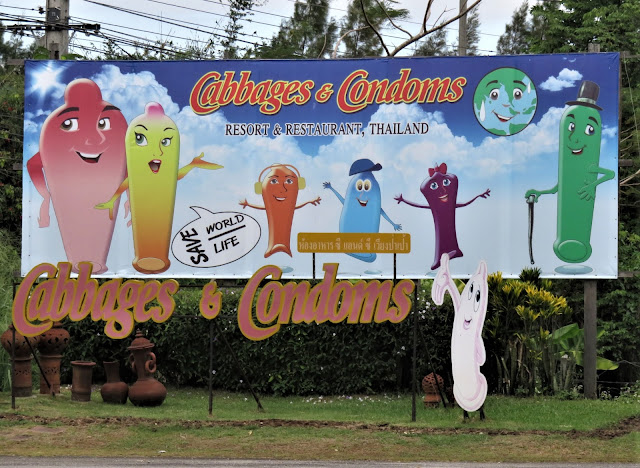 The road to Chiang Mai was lovely - a winding journey through the tropical forest. If you have ever driven on the wet sides of the Hawaiian Islands, you will have a very good image of the scenery - thick dark green vegetation and low palms covering the hillsides, heliconia and torch ginger adding touches of red. Yo had been giving us daily language lessons on the bus. Our word today was suay, meaning beautiful. But Thai is a "tonal language," meaning that many words can mean many things depending on the pitch of your voice and how long you hold the vowels. Yo had us practice this word several times, as most of us were saying "sway," meaning bad luck, rather than suu-wyy, (going up in pitch), meaning beautiful.
We arrived in Chiang Mai at lunchtime and ate at a peaceful restaurant by the side of a stone elephant lined pond. We had a local noodle dish called kao soy. I have no idea if that is how to spell it…but if you say cow soy, you will get it right - and no matter how you spell it, it was spicy and delicious. I definitely improved my tolerance for hot spices on this trip and decided I would have to step up my use of chilis when I got home again! 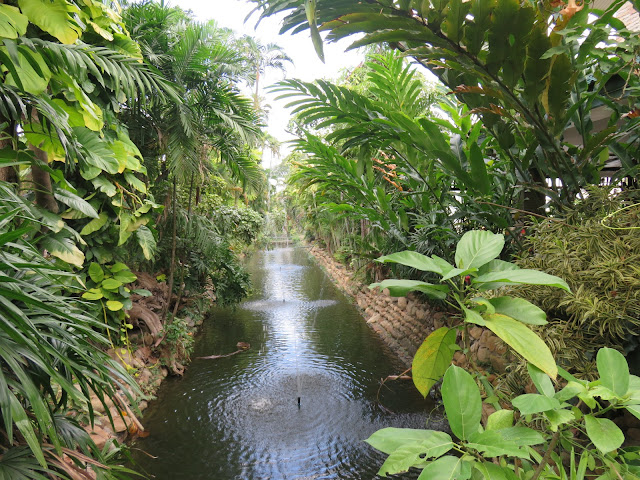 Our last stop of the day was at a large gem factory just outside of Chiang Mai. Sapphires and rubies are both mined in Thailand, and they import Burmese jade, so there were many gorgeous items for sale, but even at Thai prices, I had no plans to buy fine jewelry. Rob and I browsed through the exhibits admiring the artwork created from teak, fishbone, and jade.

We settled into our nice room at the Park Hotel which was within easy walking distance to Chiang Mai's night bazaar, so we ended our day exploring the crafts, food, and tourist trinkets in the large canvas-covered market. 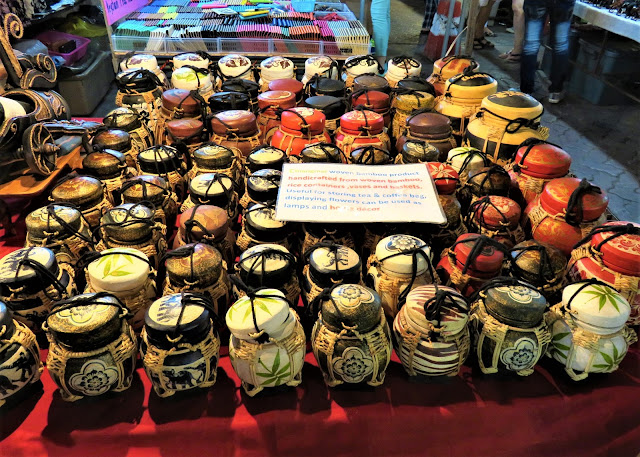 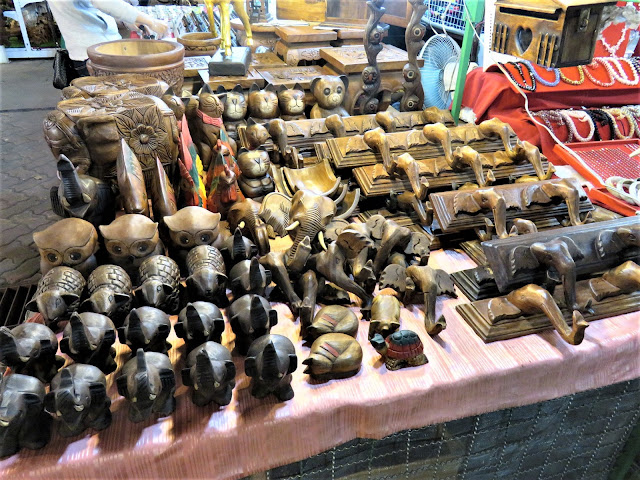 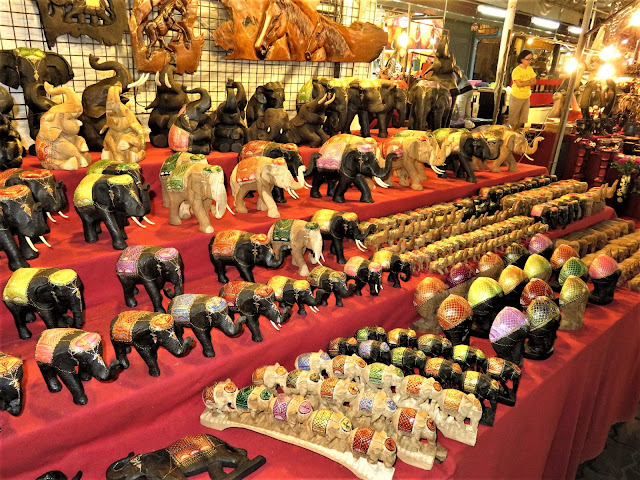 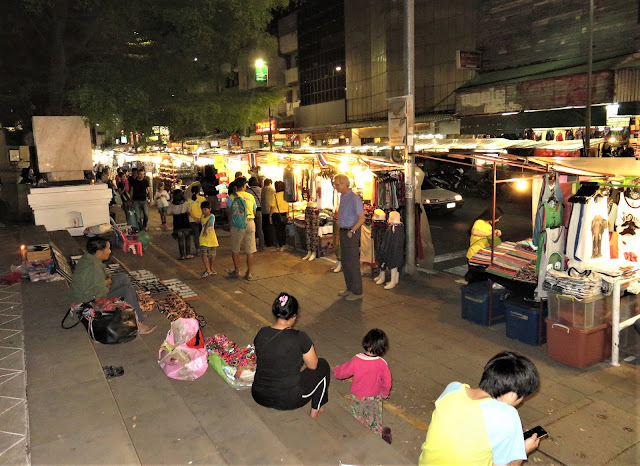 It had been another unforgettable day!
Posted by Joan Lindsay Kerr at 2:01 PM