A Traveling Day from Phraya to Chiang Rai

Today was the most uneventful day of our tour - at least on the written itinerary - as the only thing planned was the bus ride from Phraya to Chiang Rai in the very north of Thailand. But as usual, our leader Yo had all sorts of special activities planned along the way. Our first stop was at a lovely coffee shop on the banks of a large lake. I had a delicious and very beautiful caramel latte, then Rob and I walked along the lake front admiring the flowers and sculptures and watching the fishermen in the lake brining in their nets.


After our stroll, we all walked across the street to sample a local delicacy, "Dancing Shrimp," made with live shrimp taken right out of the lake. It seemed a little cruel to eat the little creatures when they were still dancing around in the sauce, but it was very good! I had made a promise to myself that I was going to be adventurous and eat everything that was offered on this trip, but I have to admit, I was hoping that Yo would not offer us bugs. Sure enough, back on the bus, the next "treat" was bamboo worms (deep fried). I took a deep breath and ate it up. Not too bad…kind of crunchy and tasteless.  These were accompanied by a flyer from the United Nations encouraging the world to "Eat More Bugs" to combat world hunger.  (Well, I'll think about it.)


The long hours on the bus today were pleasant and gave us an opportunity to catch a nap after all of our recent adventures.  We were now in the mountains, and the scenery and the climate were both beautiful. Lush green forests and moderate temperatures…quite a relief after the sticky heat of the last 10 days! As we rode, Yo shared information about the culture in Thailand and the royal family.  It was an interesting discussion. The much revered King Bhumibol Adulyadeg (Rama IV) is the 9th king in the Chakri Dynasty.  He was in poor health and there was some controversy over who would gain the throne upon his death.  Yo was careful with her words as Thailand has very strict laws against speaking ill of the royal family, but I learned through a little research that the Crown Prince Vajiralongkorn was known to be a playboy and that his older sister Her Royal Highness Princess Ubol, Ratana, who was known and loved for her charitable works, was favored by many to be the one to take the throne.  (UPDATE:  This post was written in 2015.  King Bhumibol passed away in 2016, and tradition won out - Vajiralongkorn did become Rama X.)

"Toto, I don't think we're in Kansas anymore!"  All along our route, the towns we drove through were filled with little temples, pagodas, golden towers.  My poor little camera got a good workout as I captured every "exotic" scene we passed by.  Even the street signs had an artistic flair!

We arrived in the city of Chiang Rai in the afternoon, stopping first in a pretty park and shrine, with offerings of eggs, incense, and other gifts in front, and brightly colored paper leis draped over the plaster animals. We spoke with a young woman there who had made a pledge to Buddha that if she passed her nursing exams, she would run around the shrine 100 times. She was on round 80 when we spoke to her. 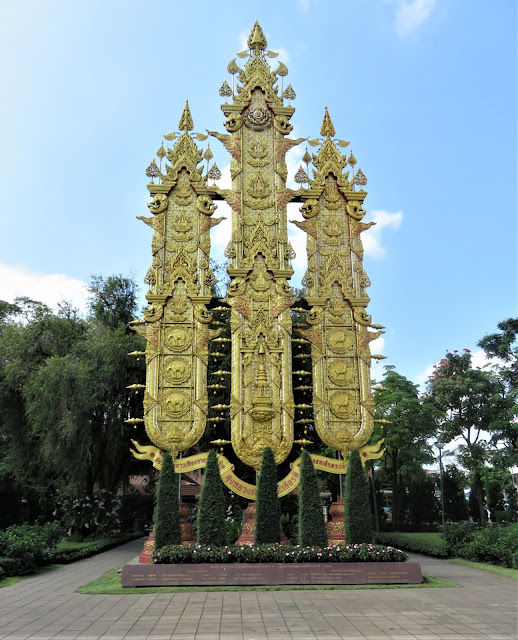 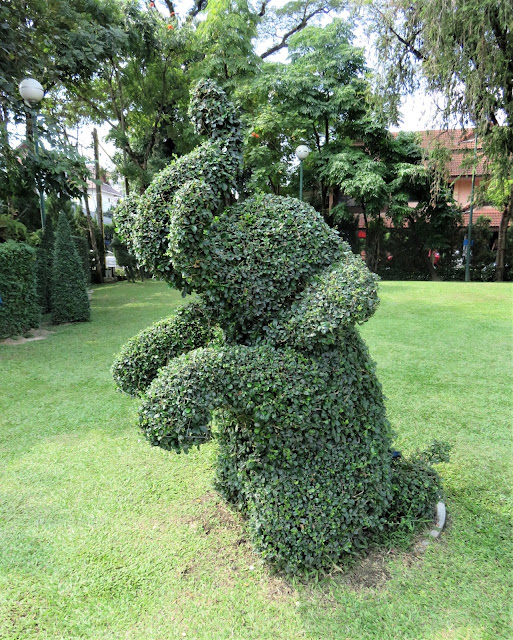 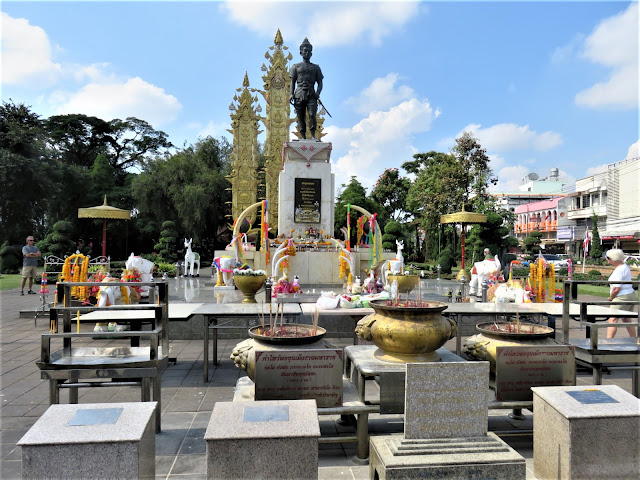 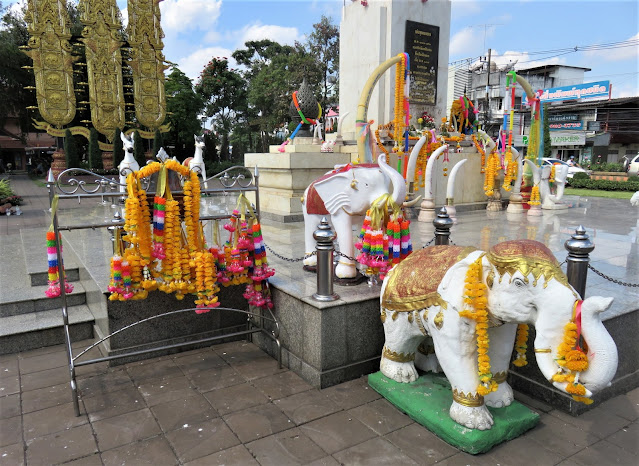 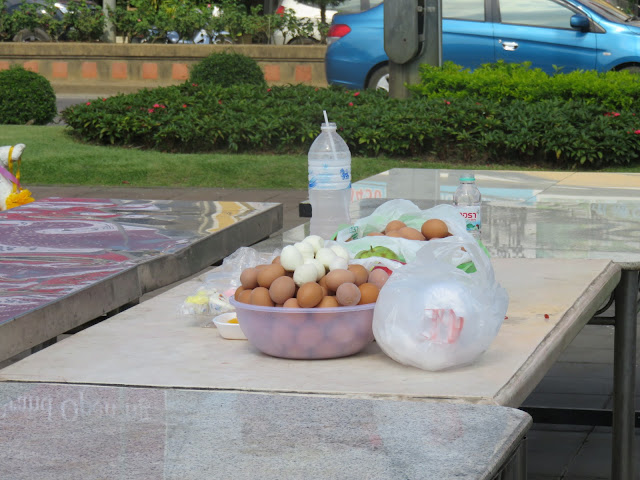 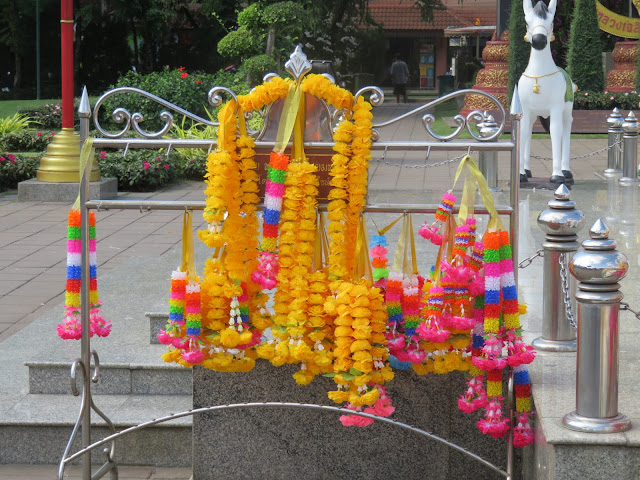 We ate lunch at a unique (and humorous) restaurant called "Cabbages and Condoms.". It is a non-profit business started by a doctor who has been educating the local people about AIDS prevention, and the restaurant was decorated with amusing decorations and posters extolling the virtues of condoms. 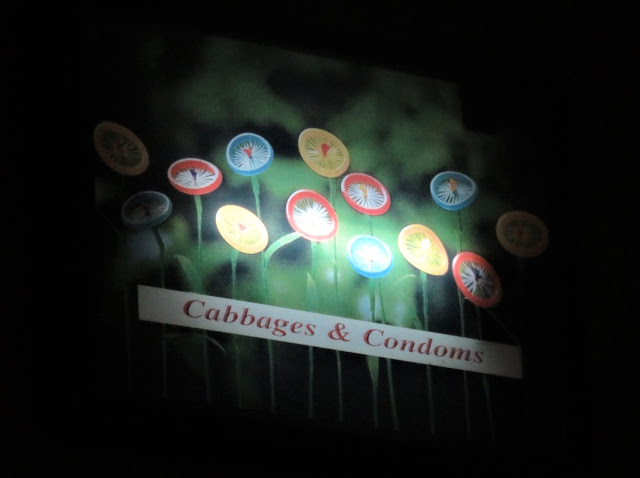 Upstairs was a small museum devoted to the lives of the hill tribes who live in this province.  A young woman there was demonstrating the Tai Lue weaving of the northern Thai people. 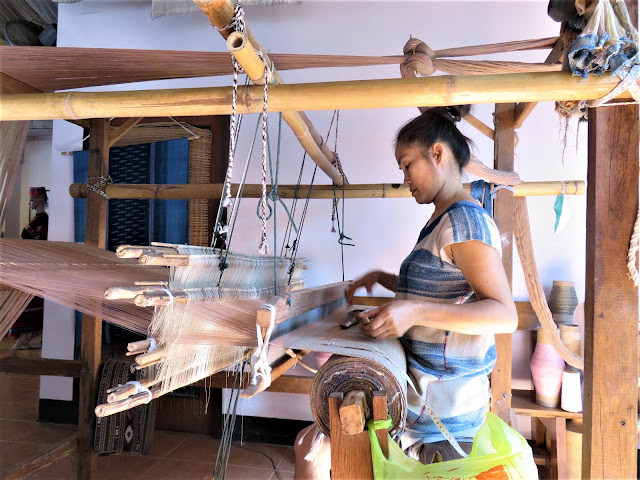 The last wonderful surprise of the day was our hotel in Chiang Rai…the Golden Pines Resort. It is a gorgeous property sitting in the countryside outside of the city. We each have our own little bungalow, with a porch in front and a little balcony looking out at the rice fields beyond. And the bathroom is upscale with rock lined walls, a huge tub, and separate shower. 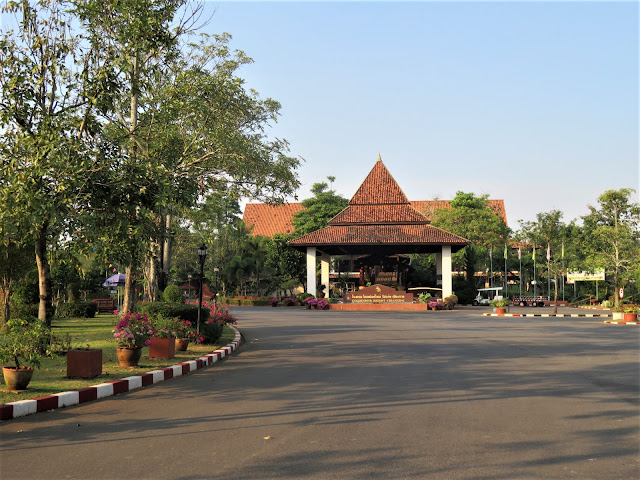 Rob and I browsed around the beautiful gardens of the hotel, then went for a dip in the deep blue pool, surrounded by tropical flowers and palm trees. What a treat! 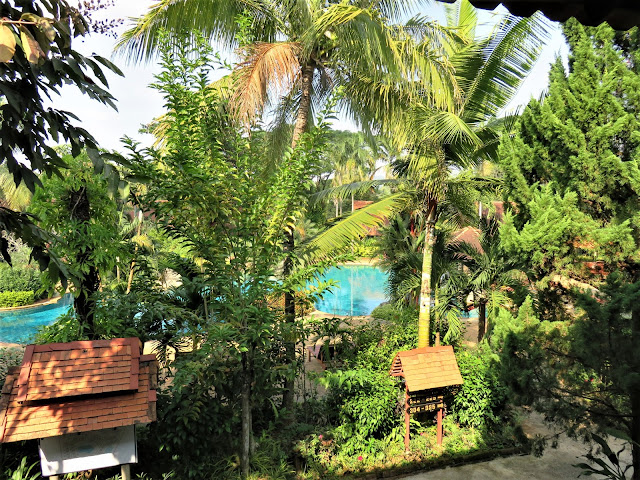 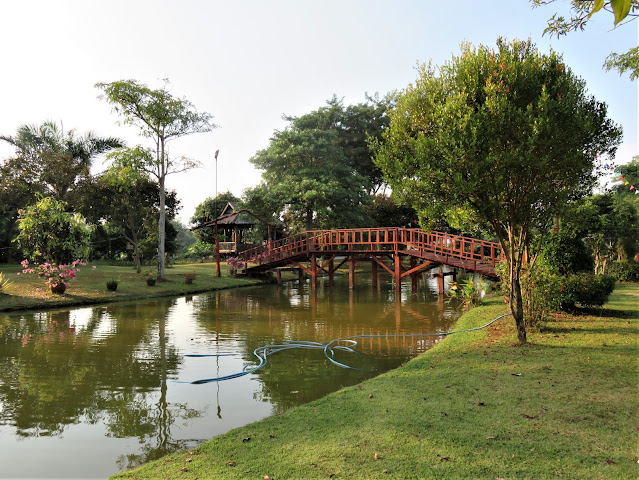 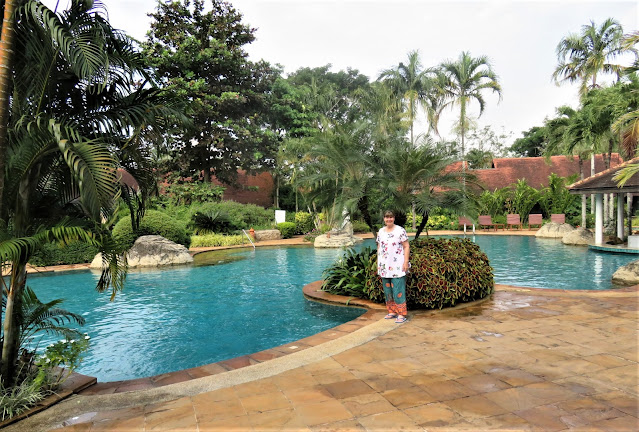 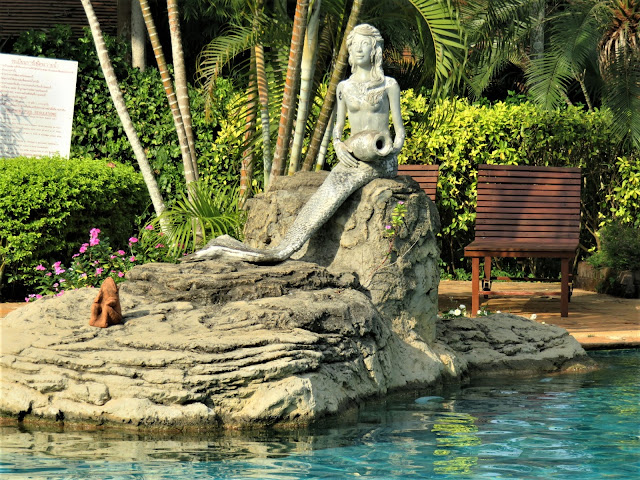 In the late afternoon, Yo took some of us on a walk from the hotel to a little farming community behind the resort. She has a knack for getting people to feel at ease, and started conversations with everyone we encountered working or relaxing outside of their simple homes. Everyone was so friendly and warm. This was rice harvesting time, and we could see the cut rice piled in the fields and small fires from  slash and burn agriculture.  One rice farmer invited us into his yard to see his rice grains drying on a huge burlap sheet laid out on the ground. Then we all gathered around the sheet and lifted the edges to help him push the spread out grain into a nice neat pile. There was wild fruit growing all around…tiger eye fruit, dragon fruit, and a large pineapple field with a new hybrid of pineapple. You can understand how people could actually live off the land in the tropics!


Our long day of travel ended with a huge buffet in the hotel, accompanied by two singers, a man and a woman, who did a great job singing some oldies…Patsy Cline, John Denver, The Carpenters, Neil Diamond, etc. By the end of the evening, our entire table was singing along.  A fun end to another fun day!

So funny. Such a brave woman eating bamboo worms. I do t know if I could! Great photos and stories you shared. Condom cowboy haha

Thanks, Caryn. The bamboo worms weren't nearly as intimidating as the "star meat!" Check out my story, "We're Going to Eat WHAT?" on Travels With Robby 2