Back to the Jungle

We were quite sure, even before we left for Africa, that one visit to the gorillas wouldn't be enough for us, so we booked two treks into the jungle.  We were so glad we did! 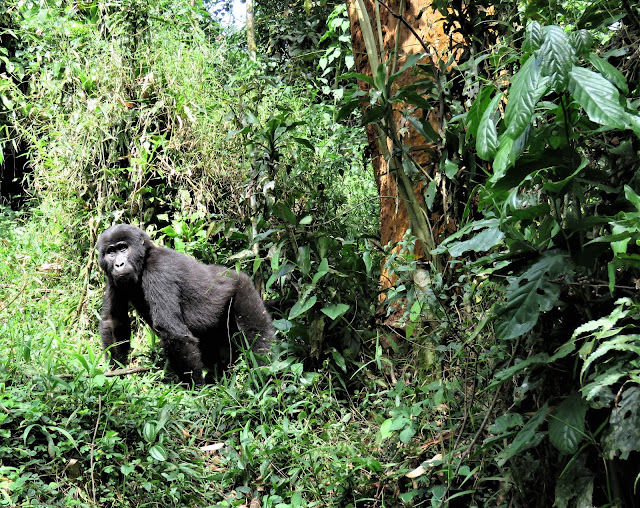 Once again, we were up early, (sore muscles from the first gorilla trek much improved), and rarin' to go on our second hike.  The morning was much the same as the first day, with a walk to the Bwindi Visitors Center, another performance by the Bike4Women group, and the orientation by the Park Ranger. 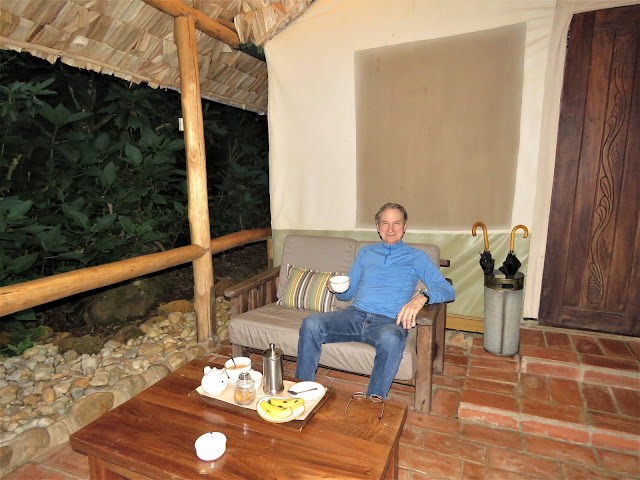 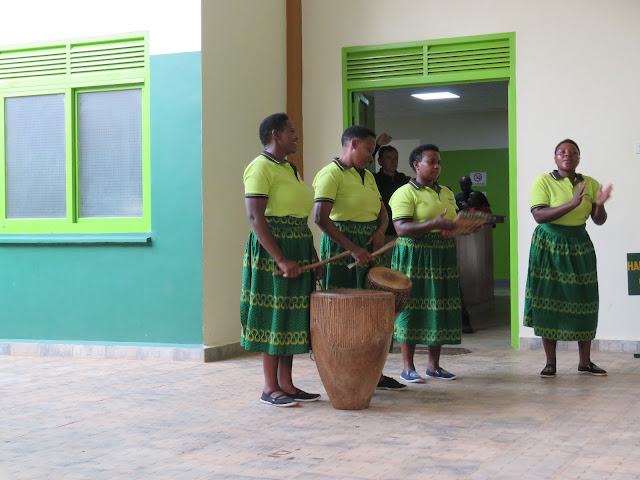 Our guide today was Cosmas, who explained that today, we would be tracking the Katwe Family.  We were delighted to learn that Jim Moore, the author of the Bill Clinton biography, would be part of our little band of eight.
So far, the morning had been a repeat of our first trek, but today Cosmas led us into a different part of the park, and the jungle walk was quite different.  Our path was more tropical, with narrow trails leading through the thick underbrush, moss-covered vines hanging from the tall trees, and giant ferns waving over the many streams that flowed through the forest. 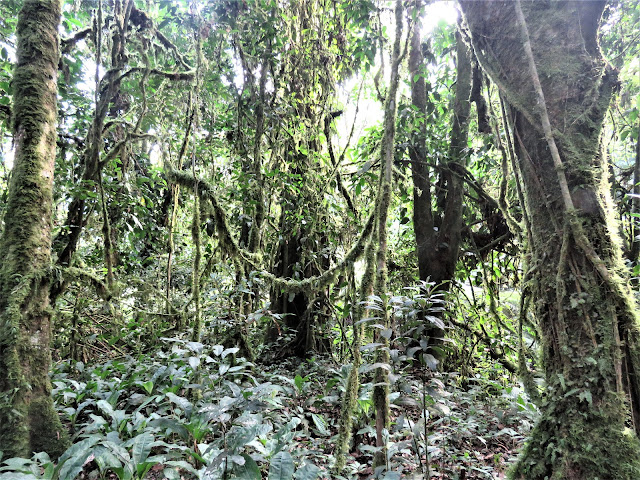 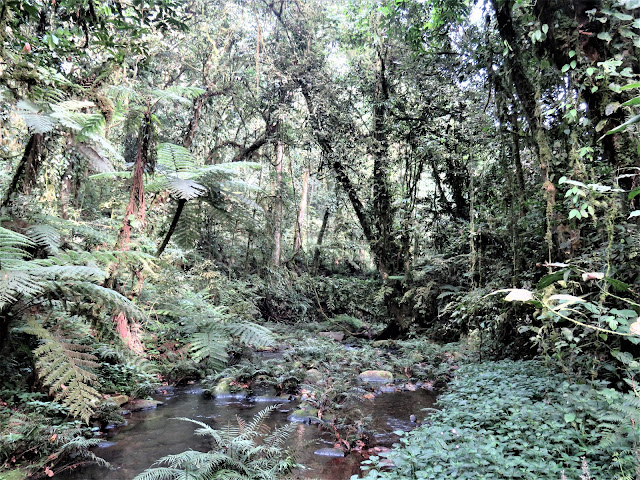 At one point, we came across a small camp in the forest.  Cosmas explained that these tents were used by the rangers who acclimatize the gorillas to human presence.  The rangers find a gorilla family and spend their days for several weeks just sitting in the jungle nearby.  In the evening, they mimic the gorillas and pretend to make a bed of leaves.  Once the gorillas have bedded down for the night, the rangers return to their camp to sleep.  Cosmas said, "They come to think of us as benign forest creatures."  The work of these dedicated rangers allows us to have the magical experience of being within a few feet of these wonderful creatures.
The jungle around us was stunningly beautiful, the damp air filled with a rich green earthy smell.  The temperature was moderately cool under the shade of the trees, but the foliage blocked any breeze, and in the high humidity, we were soon drenched with perspiration.  The hike had been described as "moderate," and some of the trails were easily navigated, but of course, the gorillas don't care about the trails.  They just wander through the thick forest looking for food.  So once Cosmas got word on his walkie-talkie that the Katwa family had been spotted, we once again plunged into the forest ourselves, stumbling up and down the slippery, muddy slopes - sometimes being literally hauled up the hills by our helpful porters.  Some of the stream crossings were treacherous, with slick stones wobbling under our feet 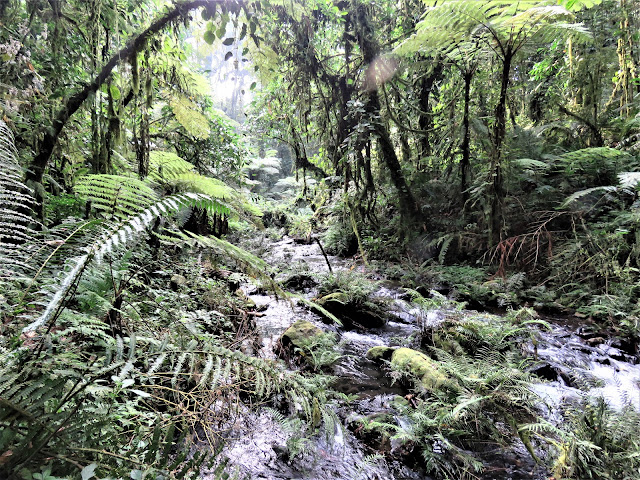 Our hike today took almost three hours, but suddenly, almost hidden behind the foliage, there they were!  At first, I thought this experience might not be as satisfying as the first trek where our gorilla family was in an open glade, lounging and playing right in front of us.  The Katwes were less acclimatized to humans.  They didn't seem concerned by our presence, but they were deep in the foliage and often turned their backs to us.
Our guide and porters walked around the group and found a better spot, using their machetes to hack down some of the tall bushes to allow us a better view.  The adults were content, just sleeping, grooming one another, or lazily reaching up to grab a handful of leaves to munch, but as before, the youngsters were adorable - play-fighting, thumping their little chests in a macho display, climbing high into the trees.  They were hilarious...and enchanting! 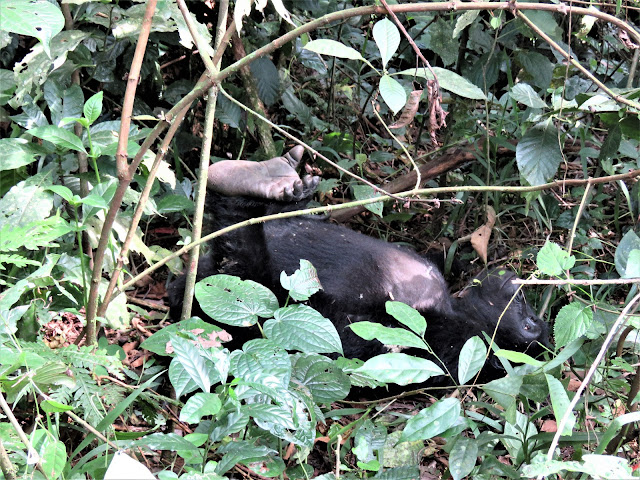 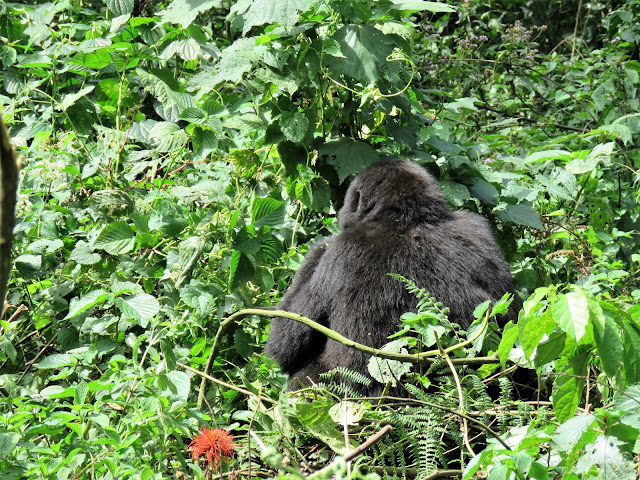 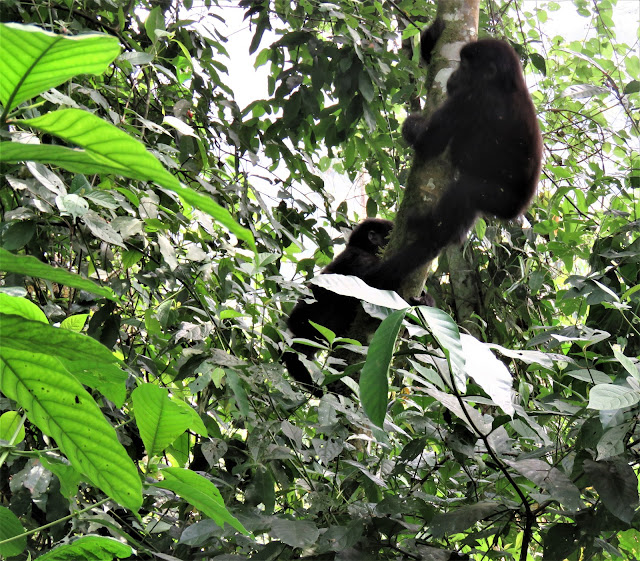 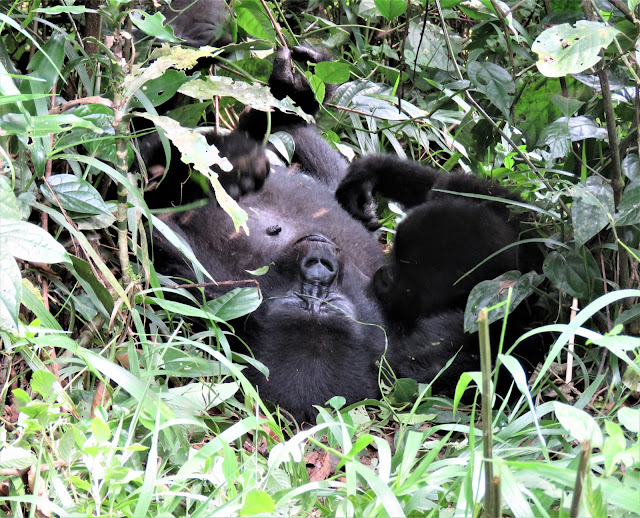 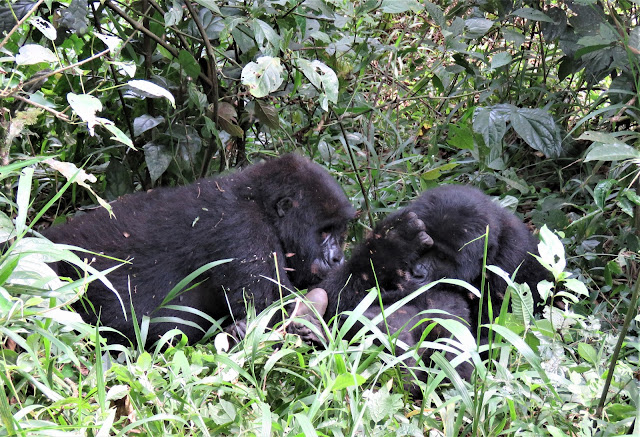 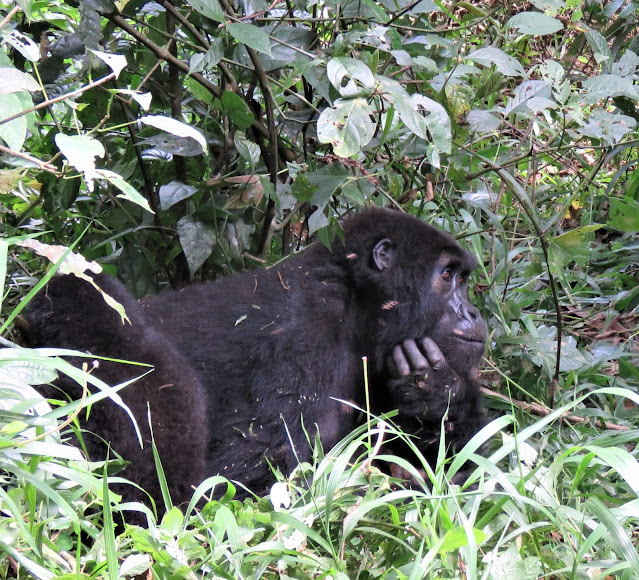 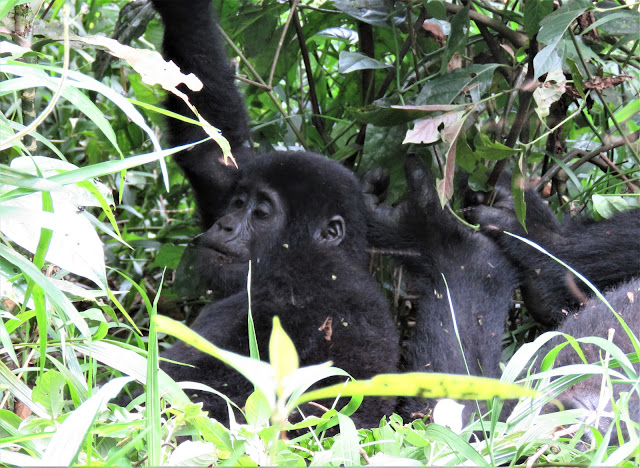 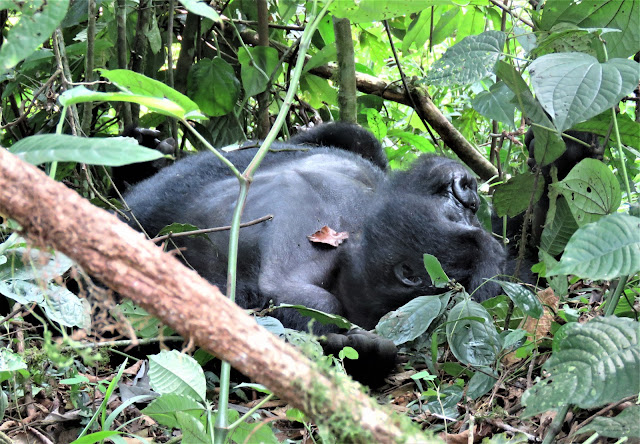 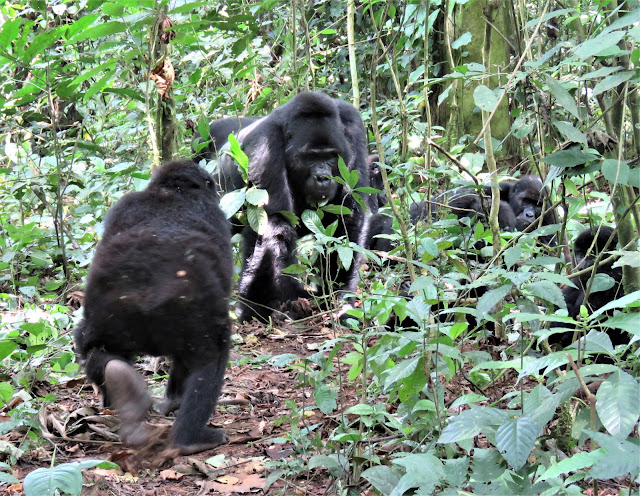 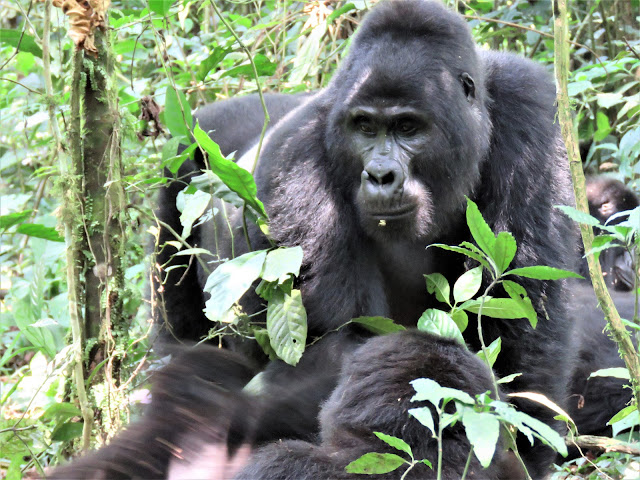 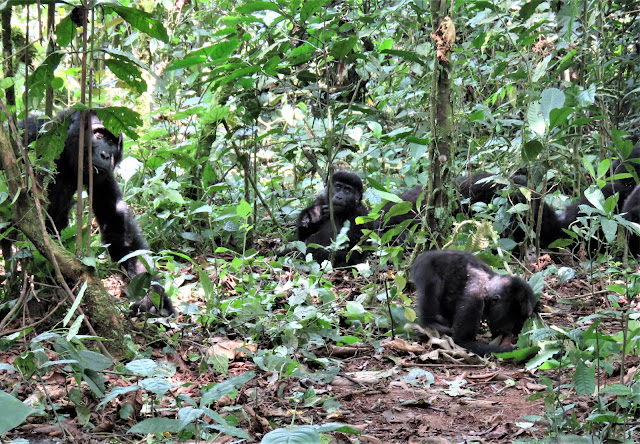 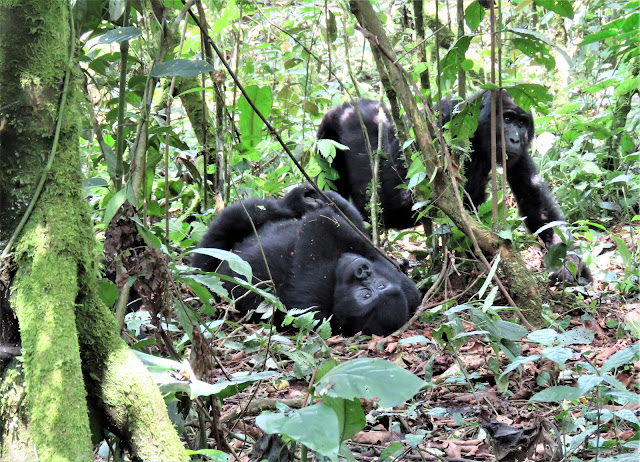 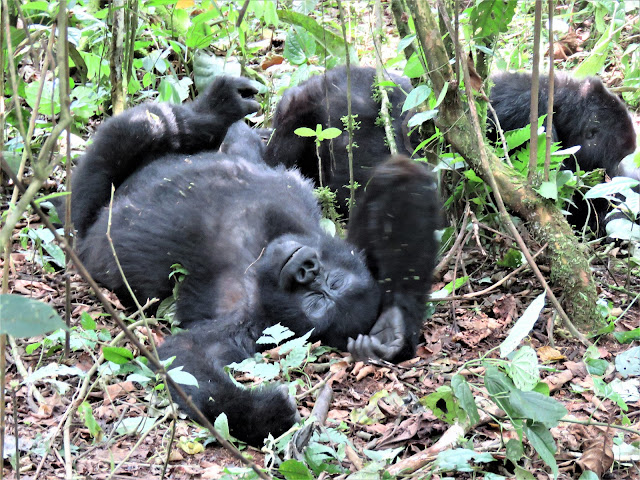 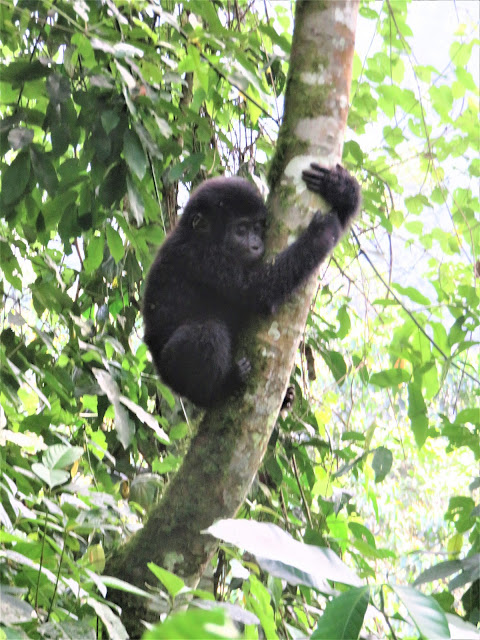 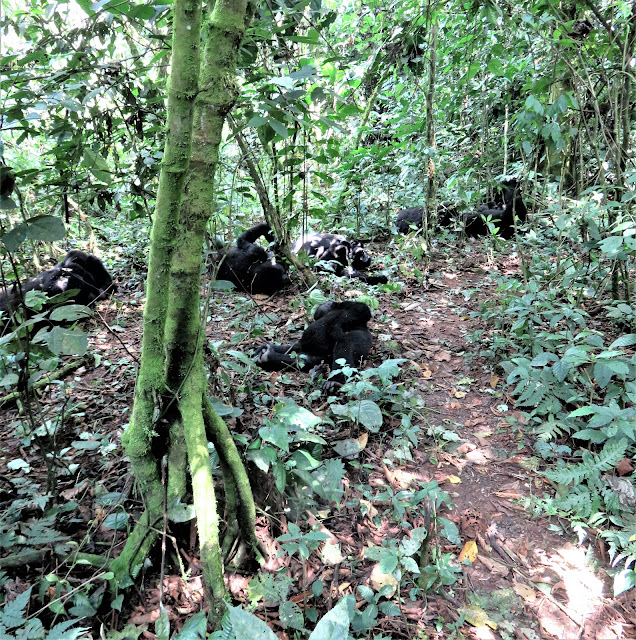 After exactly one hour with the gorillas, Cosmas told us it was time to move on.  The trip home was amusingly easy.  After tracking the gorillas through dense jungle for almost three hours, we finally had found them about a fifteen-minute walk past a tea plantation to the main road back to our lodge in Bwindi!  (I have to admit, I couldn't help wondering if they had led us the long-way-round on purpose, just to make sure we felt that we got our money's worth!)
Seeing these gentle giants in their own environment was one of the greatest thrills in all our travels.  The photos don't do justice to the experience, so here is a short video of the Rushegura and Katwa families at home.  The Gorillas of Bwindi
Posted by Joan Lindsay Kerr at 1:52 PM