Return to Africa - Part 2: "A Day in the Life" of the Nambya People and Hwange National Park

I was already awake when a cheerful "Good morning!" rang out through the canvas walls of our tent.  Rob and I called back and dressed for the day's activities:  a special day to learn about the culture and customs of the people who reside in this land.  On our first two trips with Overseas Adventure Travel, "A Day in the Life" had been one of the highlights of those trips, and once again, this proved to be true.   After a continental breakfast, our group returned to the gates of Hwange Park where we once again boarded a bus that would take us to a village homestead of the Nambya people.  Each homestead was made up of an extended family, and several homesteads formed the village.


Our first stop was in the town of Hwange, where Charles, our guide, led us into the OK Mart, a large and quite modern supermarket that stocked home goods, appliances, and hardware in addition to groceries.  Our tour members joined Charles in selecting staples - flour, sugar, beans, etc. - that would help sustain the homestead family through the winter months ahead.

Two men and a group of women and children in brightly colored sarongs greeted us with smiles and song.  The younger man, Shalom, guided us around his homestead, talking about the uses of each of the buildings: the thatched conical dwellings, the village shower stall, the drying racks,  the animal stalls - and the room in which he had been born.  The walls of the rooms were built of mud from the termite mounds we saw throughout the countryside mixed with dung and smoothed with a stone.

When Shalom's tour ended, one of the women took us into the kitchen where we learned more about the lives of the women of the village.  This is still a patriarchal society with very prescribed roles for men and women.  The women seemed cheerful and content with their role, but I admit to being a bit shocked when she described serving dinner to her husband by kneeling at his feet and making a ritual statement.  "And if I don't say it, he won't eat!"

After exploring the village a bit more, laughing at the cute little lambs and numerous chickens, we all went into the large round common room for tea and snacks and a chance to talk with the villagers.  It was interesting to notice that our lives were almost as "exotic" to them as theirs were to us. The women were full of questions.  "How do you find a husband?"  "Why does your future husband not pay a dowry?"

Back outside, the women demonstrated how they pound millet seeds into a fine powder.  Some of us tried, with mixed success, to find the easy rhythm used by the singing women.

Too soon, it was time to go.  We formed a human chain to pass our gifts of groceries from the bus to the villagers, as the women once again sang a song of thanks, "Tavoka."  I love the African harmonies and asked myself on more than one occasion during this trip, "Can everyone in Africa sing?!"  It was a lovely morning spent with delightful, welcoming people. 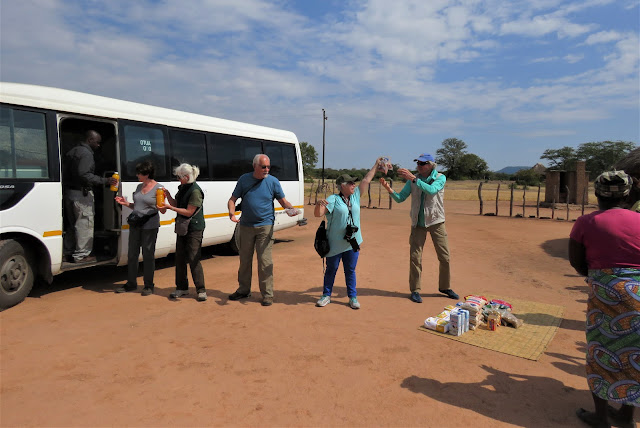 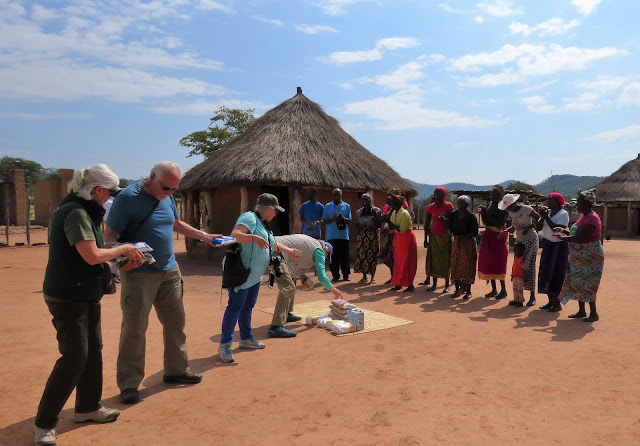 Our "Day in the Life" experience continued after lunch when Sally, our camp manager, shared the story of her unusual life.  Her mother discovered after years of marriage that her husband already had a wife.  She was an educated woman and went against societal norms with the decision to divorce him and to raise Sally and her sister as a single mom.  Sally was a good student, but got pregnant toward the end of high school, and her mother agreed to raise Sally's baby in order to let Sally finish her education.  Sally went to university, specializing in tourism and travel and is now pursuing her M.A. in business administration.  She said that there are generational changes in attitudes towards a woman's place in society, but that the changes are coming very slowly.

Hwange National Park sits in the far west of Zimbabwe near the borders of Zambia, Namibia, and Botswana.  At almost 5,900 square miles (14,650 square kilometers), it is the largest park in the country and is renowned for its abundant animal population, including over 400 species of birds.  Our tented camp, Kashawe Camp, was located in the northern part of the park, and our game drives took us through densely wooded areas filled with mopane trees that provided the resident mammals with effective hiding places.

In the winter and spring months of August through September, these deciduous trees will lose their leaves and the animals will be more easily spotted.   Mad-made watering holes were dug when the park was established in 1928 to sustain an animal population that had dwindled dramatically due to lack of water, which drains quickly from the sandy soil.  The plan worked and the animals returned to the area, but they are reliant on these watering holes, which are carefully maintained by the Park.  Charles explained that visitors in those winter and spring months would certainly see more animals because they would be clustered around the artificial watering holes, but that our sightings would be more precious because we would observe the animals in their natural behaviors and habitats.

Following Sally's talk and our daily siesta, we climbed aboard our Land Rovers and set out for a late afternoon game drive.  It was quite a different experience from our first safari through the Serengeti.  We saw no other vehicles at all, and the animals were quite shy, running into the bush as soon as they heard us coming.  But the next day, we enjoyed a full day of exploring the park, with many more animal encounters.  The pictures below share the best of these. 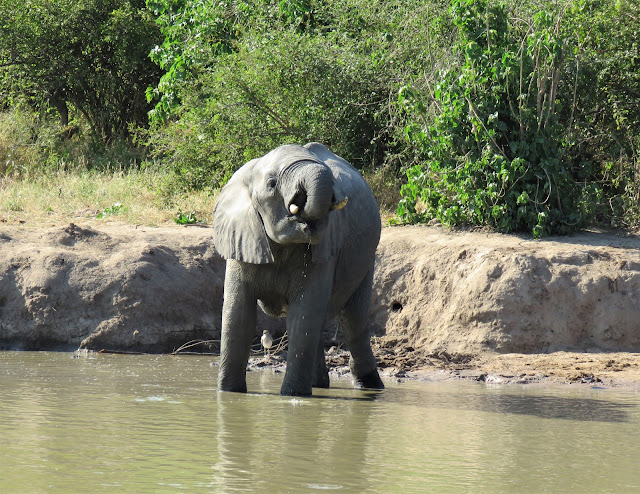 When we couldn't find the animals, we enjoyed the beautiful landscape. 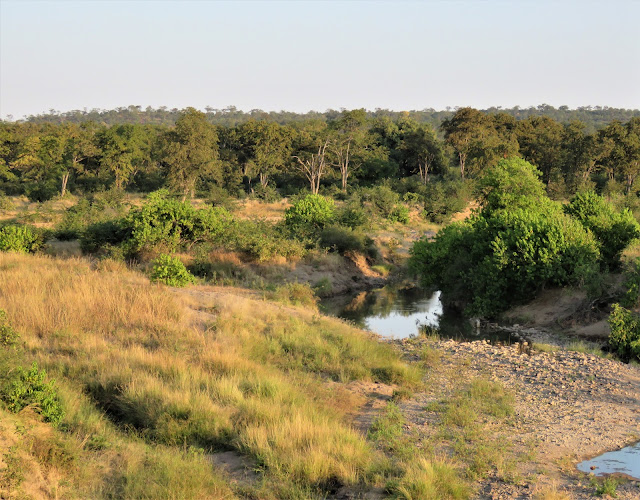 Our rest stop was on the banks of a large lake.  Far out in the middle was a small island, and we could barely make out some hippos splashing in the water.  I zoomed in on them with my camera, but got a surprise when I downloaded the photos onto my tablet and discovered that the island was also covered with large crocodiles lounging on the banks!


Our next stop was in a thatched building overlooking one of the man-made lakes in the park where we enjoyed our box lunches and the sight of the large bloat of hippos resting on the banks across the lake.  You would never guess that this rotund creature is one of the most dangerous in Africa! 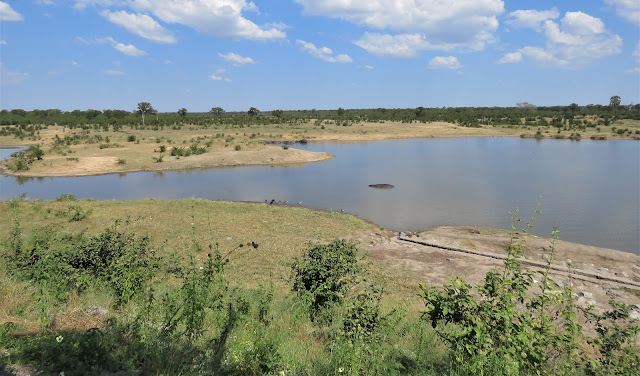 Two of the most memorable encounters of the day were with one of the largest animals in the park - and with one of the smallest.  The first was a face-to-face encounter with a young bull elephant who decided he did not want us to share his road.  As we approached, he came out of the bush and walked slowly down the middle of the road toward our vehicle.  Thabani, our young driver, turned off the engine and asked us to sit still and quiet.  The elephant continued right up to our Land Rover, stretched out his trunk and began exploring the front of the car.  Other than the movement of our fingers clicking cameras, we froze in place, eyes wide.  The elephant began to walk to my side of the vehicle, truck extended.  Thabani started up the motor and the elephant withdrew a few steps.  The minute Thabani turned off the engine again, back it came.  On came the engine, and finally the elephant withdrew back into the bush.  We all took a big breath and continued on our way, a bit awed by the very close encounter. 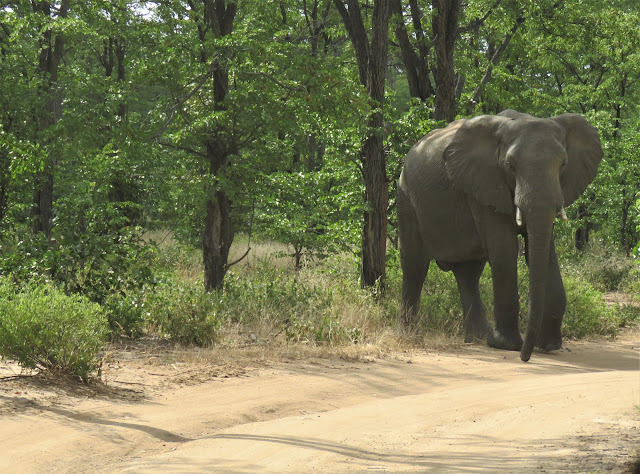 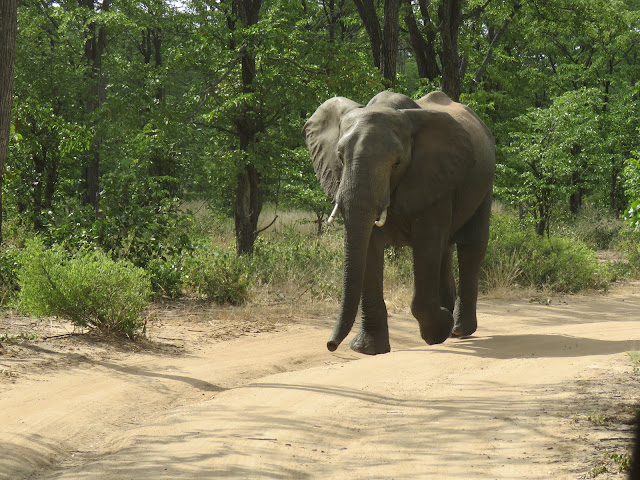 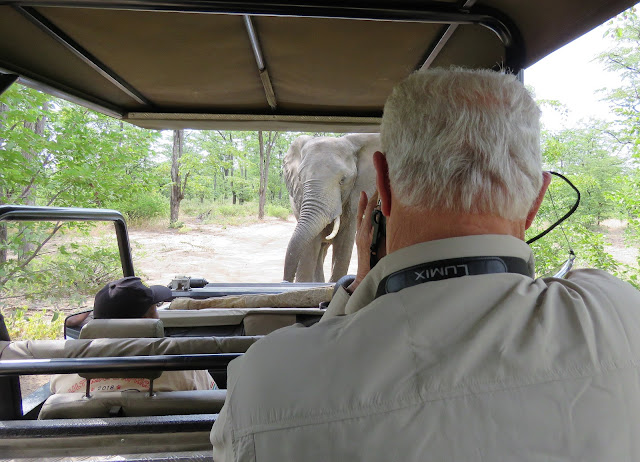 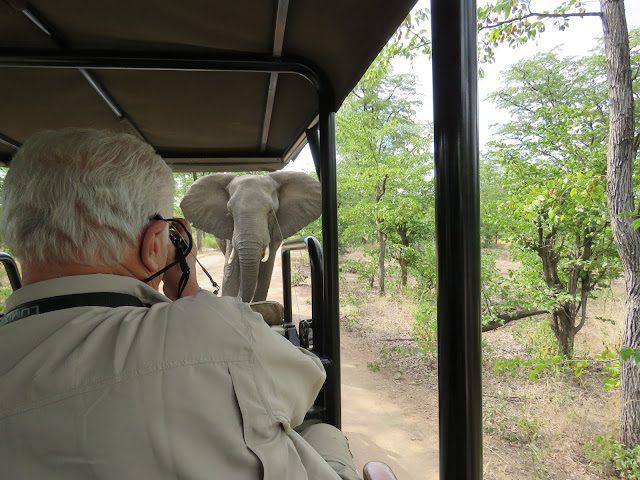 On the way back to camp in the late afternoon, we almost drove over a little dung beetle industriously rolling his sphere of dung across the road.  There was a mound of dirt along the side of the road that the beetle had to climb to reach his home.  We held our breath as we watched him toil like Sisyphus, getting his ball half way up the hill, only to have it roll down again.  But he was a determined bug, and the entire group cheered as the ball finally crested the hill and rolled into the grass on the other side. 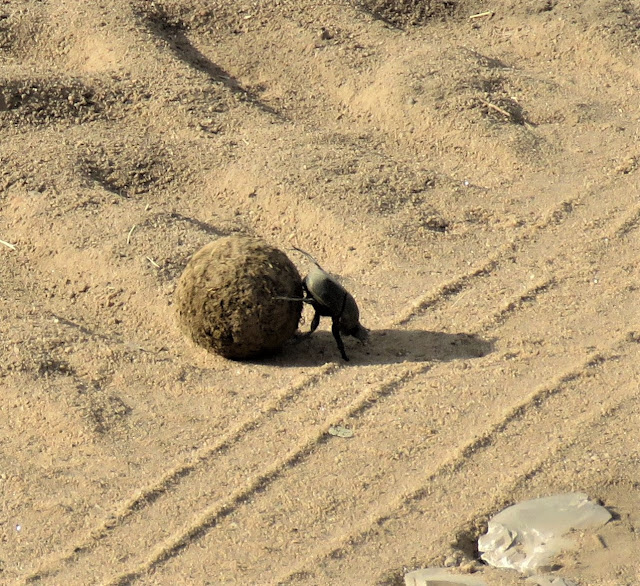 For a little video of his struggle, click:  The Triumph of the Dung Beetle

Some of the other delights of the day were the many beautiful birds in the park, including my favorite, the colorful lilac breasted roller, which I was thrilled to discover was to be found in all the parks on this trip!  Who would have ever guessed that such a gorgeous creature was just a common everyday bird?

When we returned to Kashawe Camp in the evening, our dinner was ready...and so was the staff, who entertained us with more of the wonderful African harmonies.  Hwange National Park was a great start to our trip...but we still had many adventures to come! 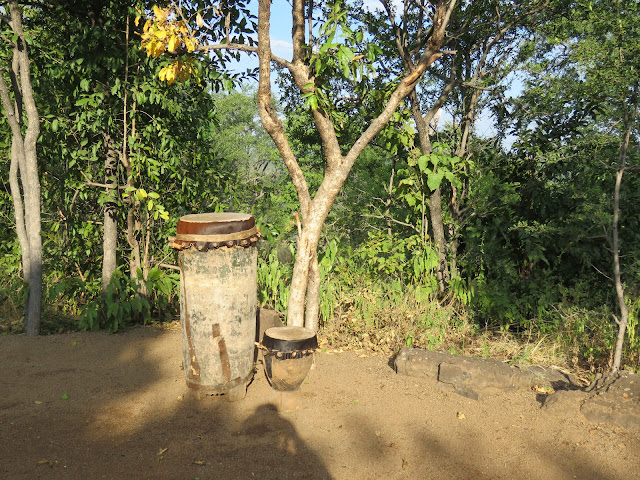 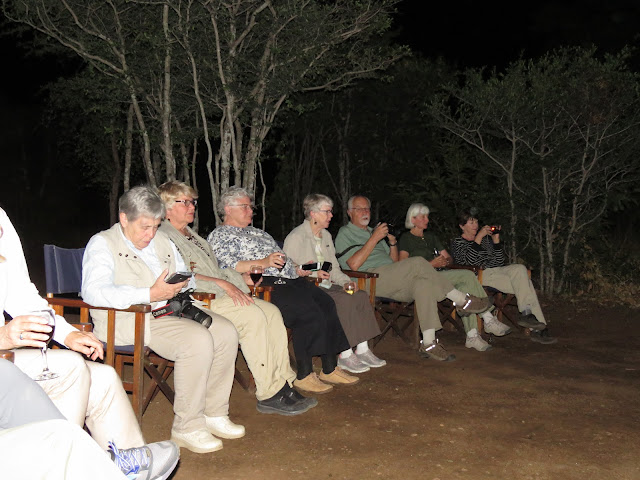 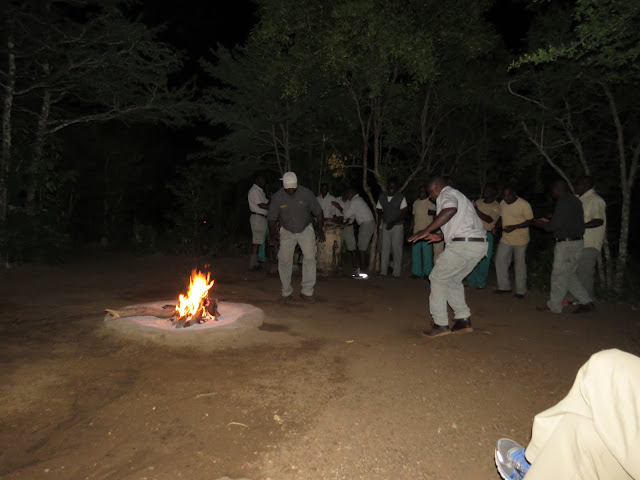 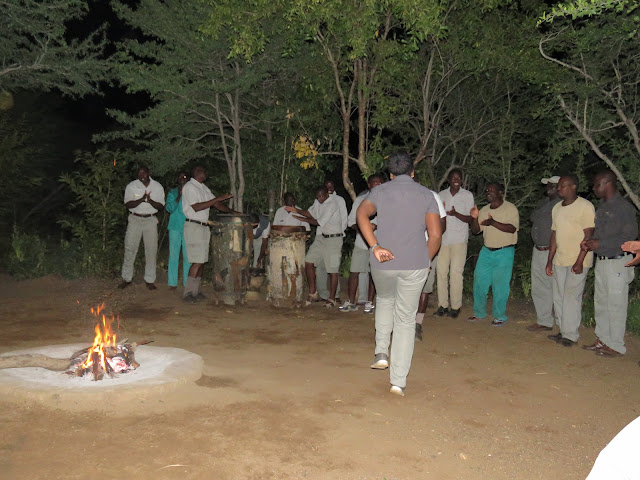 Remarkable, your pictures are outstanding. Thanks for sharing Joan!

Spectacular photography, and with your engaging descriptions I feel like I have taken a mini trip to Africa! Thank you so much for taking the time to do these wonderful blogs.