It's not a quick trip from California to Africa, but oh, what a rich reward you get at the end of the trip - a continent filled with diverse countries, cultures, climates - and, of course, the animals.  Taking an African safari is like stepping into a National Geographic nature film.  Rob and I enjoyed our first African adventure through Kenya and Tanzania so much that we could hardly wait to visit again.

We were greeted by a representative of our tour company and shuttled to the nearby Protea Hotel where we met some of our fellow travelers and had a few hours of sleep before being picked up for our final flight to the Victoria Falls International Airport.


Our entry into Zimbabwe included a long wait in line to pay our entry fees (with crisp new American dollars, which is the official currency of Zimbabwe) and to receive our (slowly) hand-written double entry visas.

Once through the line, we met Charles, our tour guide for the remainder of the trip, and boarded a bus for the trip to the gates of Hwange National Park.  Along the way, Charles pointed out the occasional road blocks manned by Zimbabwe police.  Until only about five months before, these road blocks had been posted every few kilometers and used to extort money for every minor little offense that the police could think of.  The new president of Zimbabwe, Emmerson Mnangagwa, who took over power from Robert Mugabe, outlawed this practice and is working to end the rampant corruption that had plagued the government.

Known under British rule as Southern Rhodesia, Zimbabwe gained it's independence in 1980.  There followed a period of violence against the white farmers in the country, who had their lands forcibly taken away.  The land was then often gifted to ministers in the government who had no skills at farming.  The violence led to foreign governments putting sanctions on the new country.  Sadly, Zimbabwe, which used to be the breadbasket of Africa, sank into poverty and even now has about 85% unemployment.  The good news in this unhappy tale is that tourism is growing and offers employment opportunities and income to the people of the country.

At the gates of Hwange Park, we boarded open-sided Land Rovers, and - finally - our game safari began!

I have to admit that after the enormous herds of animals we had seen in Tanzania, our first game drive was a little disappointing.  Unlike the vast open plains of the Serengeti, Hwange Park, at the end of the rainy season, was heavily forested, so animals could easily hide in the thick bush.  But when we did spot them,  we were often quite close, which led to some heart-pounding encounters!
Our only sighting on the way to our camp was a herd of about a dozen elephants, including several adorable youngsters.  Two of the babies were play-fighting with a large stick they had uprooted, grabbing it from each other with their trunks and running around a tree.  Another was nursing, quite a feat when one has a four-foot long trunk! 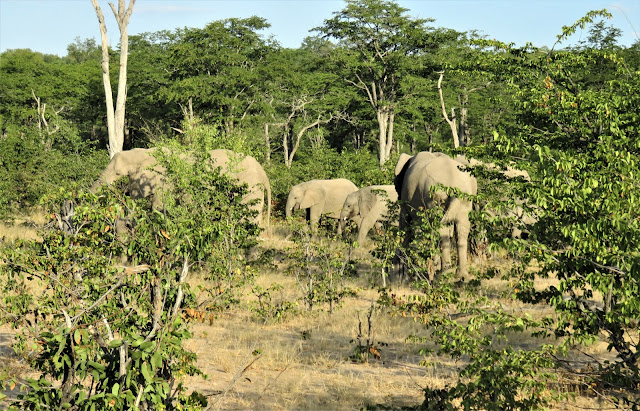 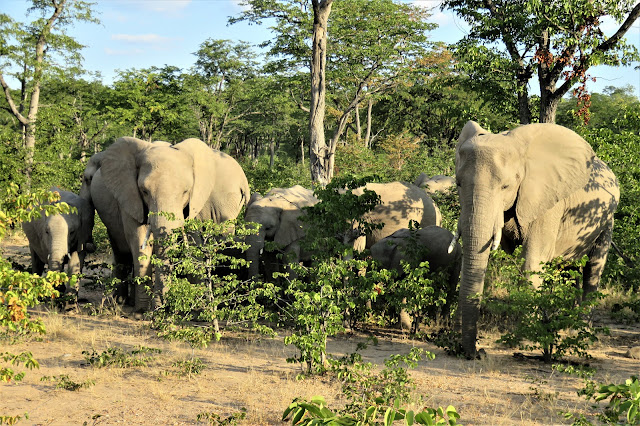 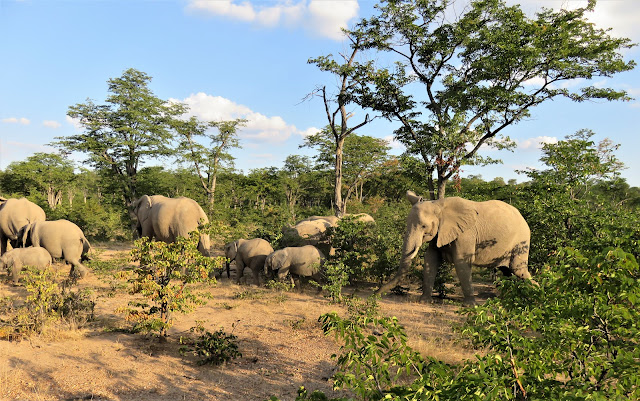 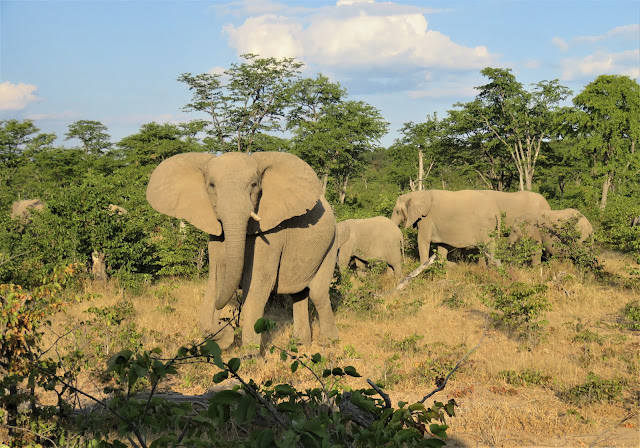 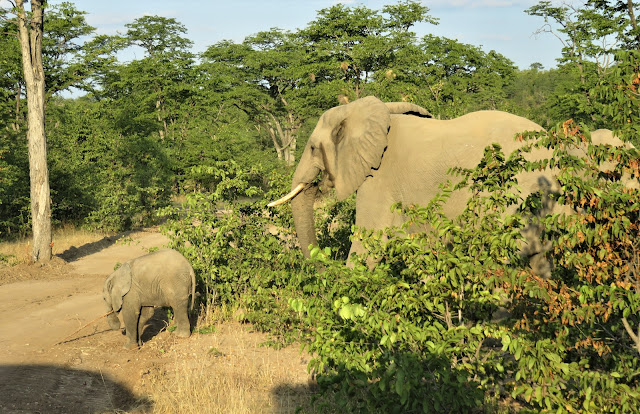 Oh, we did have one other sighting on the first drive...a flock of the helmeted guinea fowl that often shared the roadway with us throughout the trip.  They are such silly looking little birds, with their big bodies and tiny blue heads.
We could hear Kashawe Camp before we could see it.  African drums and singing filled the air as we approached the open lodge.  The staff was lined up, singing and dancing a welcome.  We were greeted, in what would become a lovely ritual throughout our trip, with cold towels, drinks, and snacks. 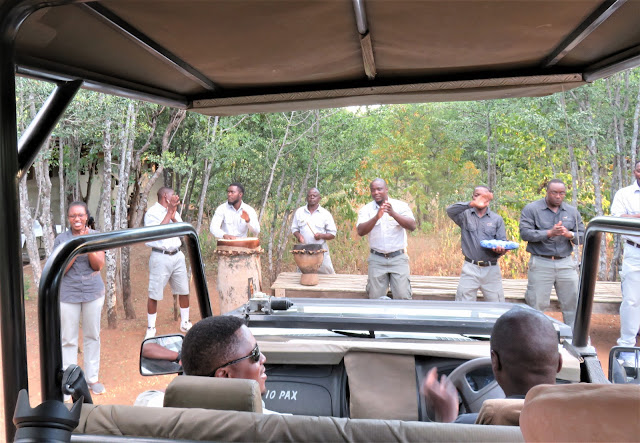 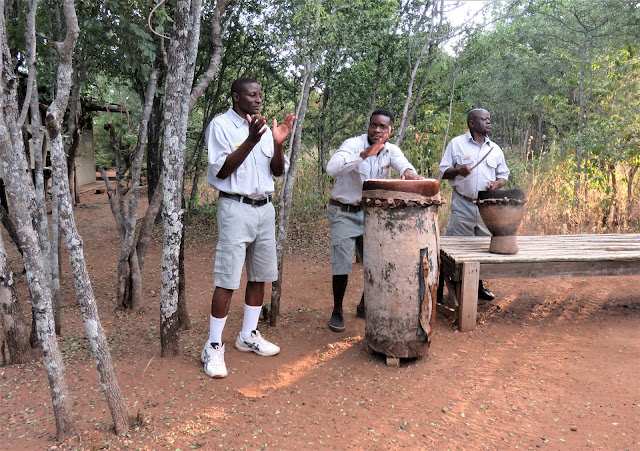 After our orientation, we were shown to our cabin, a large tent on a wooden platform with a balcony overlooking the valley far below.  Our driver, Godfrey, a large man with a deep, booming voice, gave us a little talk on safety:  don't leave the tent unescorted at night, use the air horn in the case of an emergency, use the bug spray on the bedside table as malaria was on the rise.  None of this sounded very comforting to this reluctant camper, but I knew from our past adventure that we could be cozy and comfortable in the room.


After settling in, we all returned to the Lobby/Dining Hall for a chance to get to know our fellow travelers better.  It was amusing to learn that, in our group of 14, there were two Dennis's, two Karens, and two Joans - plus a Sue and a Susan!  Happy Hour was followed by a delicious dinner (which was formally introduced by the chef).

It had been a very long three days, and we fell gratefully into bed for the first good night of sleep since leaving home.  I dreamed happy dreams of the upcoming adventure.

I’m hooked Joan! What an adventure. Can’t wait to see what’s next ��

Admiring your stamina, Joan! Looks like an inviting place, and I'm eager to read more and see more of your photos. Thanks so much! xoA (

Becky and Annis, thanks for coming along for the ride! I'm hoping to have all the posts finished by the end of this week, as we leave for our NEXT adventure on Sunday!

Beautiful detailed writing. It made me feel like I was on the journey with you.

Haha, Dennis! Thanks for my laugh of the day.