Today was the day Rob and I had planned to visit Ayuthaya, which is about 70 kilometers north of Bangkok.  Ayuthaya was the capital city of Thailand from 1350 to 1767 A.D. when it was destroyed by invading the Burmese army.  The ruins there are now a UNESCO World Heritage site, and I had been looking forward to the visit.  But the first rule of happy touring is flexibility, and we both decided that we simply were not interested in walking around the ruins in the intense heat.  So I pulled out the guide book and found a new adventure closer to home.

﻿﻿ After another wonderful breakfast buffet in the hotel, we hopped on the Skytrain to Sathon Taksin, the Central Pier, where we bought a day pass on the tourist boats that move quickly up and down the Chao Phraya River, dropping tourists off at the many piers along the way.  The colored flags on the boats let you know the route of the boats, as some of them are express boats and don't stop at every pier, but I didn't know this when we bought our tickets. I just trusted that the woman who had hurried us onto our boat understood my attempt to say "Thewet Pier" with the correct pronunciation and had pointed us in the right direction!

The Chao Phraya has been the primary thoroughfare for Bangkok for centuries.  The riverbanks were lined with everything from modern skyscrapers to little wooden shacks.  Grand old hotels displayed the elegance of an earlier time, and modern shopping malls catered to the consumerism of today's world.
﻿

﻿
The traffic on the river was almost as busy as the traffic in Bangkok's streets.  Large barges sometimes blocked our way, and little motor boats zoomed around us as they ferried people from one side of the wide river to the other.  Many of the brightly painted boats were decorated with garlands of flowers, and the banks of the river were sometimes clogged with water plants. 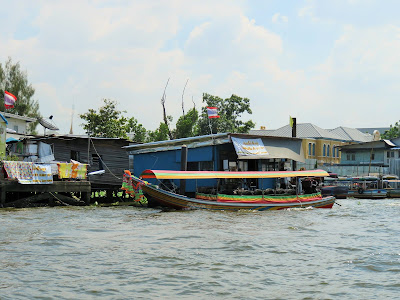 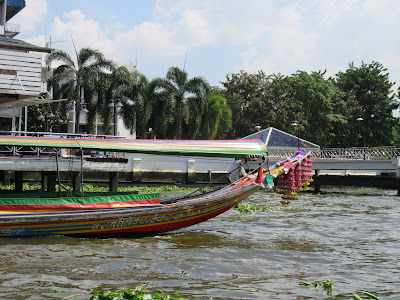 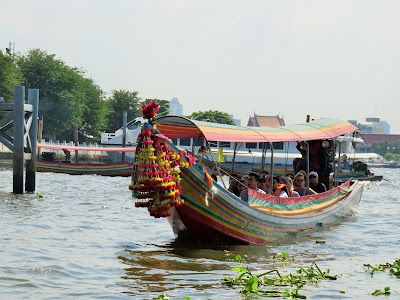 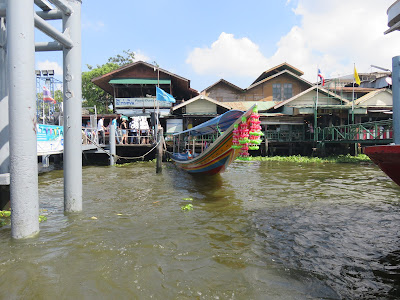 I caught a glimpse of the turrets and roofs of the Royal Palace, but it was not right on the riverbank, so it was a bit obscured by trees and other buildings.  We will be seeing it later on our tour.

﻿
On the other side of the river, Wat Arun, one of the most beautiful of Bangkok's temples, was unfortunately clothed in a thick scaffolding.

My trusty map showed me that the Thewet Pier would be just beyond the high cables of Rama VIII Bridge, and sure enough, there it was!

Just beyond the pier stood a line of tuk-tuks, the little motorized vehicles that zip tourists around the town.  We had been warned to be careful of tuk-tuk drivers who offered "tours of the city" at very low prices.  What they are really offering is a "tour" to a "gem shop" selling bits of cut glass at outrageous prices.  But our driver knew that scam and assured us that he would take us to our destination with "no stops."  We stooped under the very low roof of the cab and whizzed down a tiny street lined with nurseries containing every sort of tropical plant.
﻿

Thank goodness we decided the take the tuk-tuk!  On my map, the distance to Dusit Palace Park looked quite walkable, but it turned out to be several miles.  We would have been dead by the time we arrived.

The main attraction in Dust Palace Park is the gorgeous Vimanmek Teak Mansion.  It was built by King Rama V, whom you might know as Chulalongkorn, the young crown prince who was educated by Anna Leonowens of "The King and I" fame.  When studying in Europe, he acquired a taste for some of the art and architecture of the west and erected a unique new palace combining eastern and western style and furnishings.  The palace is built of golden teak wood and does not contain a single nail.
﻿

Before entering the grounds, we went through several layers of security.  First our bags were examined at an outer gate.  We bought out tickets and then had to stow all of our belongings (including my camera) in a locker.  Before entering the palace, we had to remove our shoes and then were patted down one more time.  We had arrived a little too early for the English language tour, so we walked through the palace alone first.  The entire house is surrounded by wide galleries, lined with windows that could be opened to the breezes in the days before air conditioning.  Each room was filled with the furniture used by the several generations of Thai royals who made this their home - floral needlepoint tapestry covered the chairs, gorgeous floral carpets of white and rose covered the floors, and the cabinets were filled with china and bric-a-brac from around the world.  Photographs of the royal family lined many of the walls.

I assured Rob that we would learn much more with the help of the English language tour, so he agreed to go through the palace again.  Oops...I had to keep from giggling as I discovered that we were not going to learn as much as we had hoped.  Our sweet little tour guide was a diminutive and sincere woman who rattled off a great deal of what I'm sure was helpful information - in an accent so thick that, even with a great deal of concentration, I caught only about 25% of it!  Rob understood even less, so I did as much translating as I could without being too obvious.  We did learn that much of the china place settings came from China and England, that there were vases from Murano, Italy... and that the royal family dined on a different color of plates for each day of the week.  (Saturday was purple.). We did observe the wooden pegs that held the teak wood in place, and we learned that the house contained 300 windows.  A canal behind the house held a row of charming wooden guest houses built on stilts for the "commoner" guests of the king.


We retrieved our belongings and found another tuk-tuk just outside the palace grounds to take us back to the pier where a nice couple helped us understand the flag system of the tourist boats.  Our boat came along almost immediately and we floated back to the Central Pier and returned to our hotel for lunch.  My body clock was still not quite turned around, so I took a long nap while Rob went out for another Thai massage and a visit to a nearby coffee house where he enjoyed some jazz and chatting with other tourists.
﻿

﻿
The rest of the day was a nice leisurely chance to catch up on some reading and writing.  We ended the evening in the hotel lounge listening to their singer, Chai, who played the guitar and sang lots of songs from the Beatles, Paul Simon, John Denver.  I'm so glad we came to Bangkok several days before our tour starts.  We are both enjoying the leisurely pace - especially with the heat.  But we are looking forward to big adventures coming up in the next couple of days!