My first impression of Bangkok?  It's freaking' hot here.  At home in Bakersfield, California, we are fond of saying, in defense of our summer days of 110 degrees, "but it's a dry heat.". Bangkok is not a dry heat.  It's a tropical heat, a sticky heat, a heat that drenches your clothes within minutes and leaves you hoping desperately for the next cold shower.  We had done our research.  November was supposed to be the beginning of the dry season, with cooler temperatures, but we arrived on Sunday to temperatures in the high 90's.  Our plans of poking into every corner of this huge city before beginning our official tour on Thursday were quickly replaced with thoughts of sitting in an air conditioned lounge sipping on tropical drinks and practicing our Thai language skills with the waiters.

But, hey, Rob and I had come a long way to visit this remarkable city, so the tropical drinks were put on hold and we quickly ventured out into the chaos.  Second impression of Bangkok?  It does a remarkable job of moving people around!  The city is huge and busy, and as we rode in our taxi from the airport, I wondered how we would ever master getting around the city.  But after three days here, I can say with confidence that I have mastered the main modes of transportation:  the BTS (or Skytrain), an elevated train that gets one quickly to most of the neighborhoods of the city, the tourist boats that ply the Chao Phraya, the wide river that splits the city in two, and the tuk-tuk, which takes you from the pier to your local destination.

But I'm getting ahead of myself.  Let's back up to the beginning of the trip.

It is a long way from Bakersfield to Bangkok.  We just couldn't find the will to sit in economy seats on that fourteen hour flight to Manila, where we changed planes for the much shorter leg to Thailand, but my motivated husband did his research and found us a great price on business class seats on Philippine Airlines.

Only problem with going business class?  I am now thoroughly spoiled and never want to go travel any other way!  We arrive at LAX in the early evening on Friday but enjoyed passing the time in the International Lounge which served "everything from soup to nuts" - and sushi and Bailey's Irish Cream (along with any other libations you might desire.). The lounge had views down into the recently remodeled Tom Bradley Terminal.  I watched the tower in the middle of the terminal, which had an ever changing floor to ceiling screen showing everything from waterfalls to Busby Berkeley style dancers.
﻿

When we boarded the plane, the flight attendant immediately offered us the menu and brought us a welcome drink.  We had already eaten, but who could pass up another good dinner?  Not us!  After dinner, we stretched out in our nice lie-flat beds and actually slept for almost six hours, then had a lovely breakfast.  Yep!  I am completely ruined.
﻿﻿﻿﻿﻿

Sunday, November, 22
We arrived in Manila, where we had a short layover, on Sunday, having completely missed Saturday by crossing the International Dateline.  After a nice stretch in the Manila airport lounge, we boarded for the three hour flight to Bangkok... with another meal, of course.  We both said we ate our way to Bangkok!

As we approached the city, I spotted the Chao Phraya  River snaking its way east of the city.  The river splits Bangkok in half, with many of the historic sights found along its banks.
﻿﻿
We got through customs and immigration with no problem and found the taxis lined up outside of the terminal.  It was Sunday so the traffic was fairly light, but our taxi driver said that we could expect the rest of our stay to include heavy traffic right outside our hotel.  (He was right!  When we set out the next morning before 8:00 a.m., the street was filled with cars and motorbikes.)
﻿

﻿﻿
The Evergreen Laurel Hotel is a lovely business hotel right in the heart of the Sathon/Silom area, the business district of Bangkok.  By the time we got to our room, we had been traveling for about 36 hours, so even with the six hours of sleep on the plane, we were completely exhausted.  I could have gone to sleep immediately but we know how important it is to keep on doing the first day in order to get our body clocks turned around, so we took a little stroll up to busy Silom Street, lined with shops and street food vendors.

We had a simple supper in the hotel restaurant of delicious carrot soup and a salad, then fell into bed at about 7:30 p.m.  Around 2:00 a.m., we were both wide awake for awhile, but we went back to sleep until around 6:00 a.m. on Monday and woke up feeling like new people!

The hotel's breakfast room was already filled with travelers, so we sat with a nice pair of women from Canada who were on another of Overseas Adventure Travel's Tours.  Rob and I are focusing on Thailand, but their five-week trip is taking them to Myanmar, Thailand, Cambodia, Laos, and Vietnam.

After breakfast, we tried (but failed) to beat the heat by heading out early to Lumphini Park, which is Bangkok's version of Central Park.  We are not in one of the historical districts of the city, filled with temples and palaces.  Instead, our view from the hotel is of high rise office buildings and apartments.
﻿﻿﻿﻿﻿﻿
But even here, it was obvious that we had entered a new and unfamiliar culture:  little temples on the wall of a gas station, street food vendors and Thai massage parlors lining the streets.
﻿

Once again, we walked down Silom Street under the shadow of the BTS, or Skytrain - the elevated train that offers quick transportation around the city.  At the end of the road was Lumphini Park, a lovely green space with bicycle paths and lakes.  We caught sight of a couple of the big monitor lizards searching for bugs in the grass.  I had my eye out for new birds to show my birder brother, but all I found were familiar pigeons, sparrows, and mynah birds, along with some egrets and a crow-like bird.

By 10 a.m., we were soaking wet, in spite of the shade, and made our way back to the Evergreen for a shower and a little rest.  After a short nap, we discovered that the hotel offered a spectacular lunch buffet, so we were quite happy to remain in the air-conditioning a bit longer!
﻿
﻿
﻿

﻿
As it was still much too hot to go exploring, we decided on a different type of cultural adventure - a genuine Thai massage at a local massage parlor, the Oasis.  We were escorted upstairs and each shown into a small dark room with no furnishing other than a cloth covered mattress on the floor and some hangers on a hook on the wall.  My attendant, a young man who spoke no English, handed me a couple of items and disappeared.  I examined the items and discovered that they were some baggy cloth pants and a hospital-gown-like top, so I changed into them, and soon the masseur returned.  I laid down on the mat, and enjoyed an hour of being turned into a human pretzel!  It felt (mostly) wonderful - I only squealed in pain once or twice.

Amazingly, the massage really helped my jet lag, and we felt ambitious enough to give the Skytrain a try.  The closest station, Chong Nonsi, was only a few blocks down the street from our hotel.  We walked up the long staircase to the elevated walkways that crisps-cross the busy boulevards, then down a long hall, filled with Thai commuters heading home from work.  We changed some paper baht, the Thai money, into coins for the ticket machines and went through the turnstiles to the train.  Another adventure!  The train was completely packed, and the only way to get on was to just take a deep breath and plunge into the crowd.
﻿

Happily, we had only two stops to go to the Central Pier, where we found the free shuttle boat to Asiatique, a huge shopping complex built in the old warehouses of the East Asia Trading Company.  As we floated down the river, we passed a series of brightly decorated and lighted boats celebrating the beginning of Loy Krathong, one of the most popular festivals of Thailand.  (More about that in an upcoming post!) 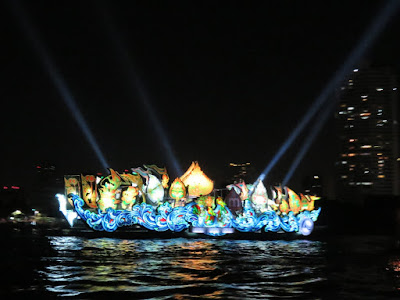 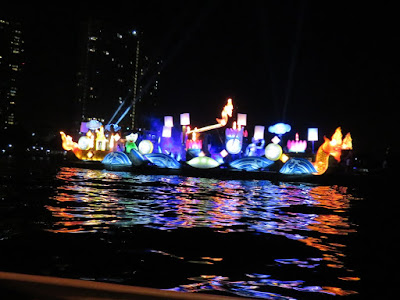 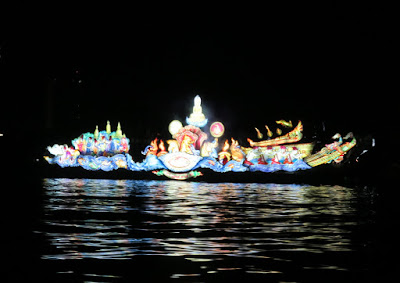 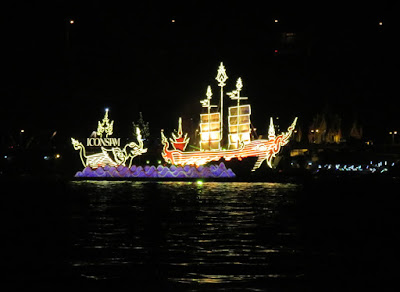 Asiatique reminded me of the Grand Bazaar of Istanbul, with shop after shop filled with colorful offerings of every type.
﻿
﻿

The lights of the city sparkled on the river as we floated back to the Central Pier, and the BTS ride home was much easier, as the evening commute was over.  Our jet lag was kicking in again, so after a small supper of soup and salad, we went to bed and fell immediately to sleep.

Posted by Joan Lindsay Kerr at 3:50 AM