Most tourists arrive in Tanzania eager to see the wildlife that inhabits the woodlands of Tarangire and the "endless plains" of the Serengeti.  We were no exception, but today we enjoyed experiencing another side of life in Africa - the life of the people in the city of Arusha,

Arusha lies at the foot of Mount Meru in the northeastern part of Tanzania.  It is "central headquarters" for tour groups due to its proximity to Tarangire and Serengeti National Parks, Oldupai Gorge and Ngorongoro Crater.
Arusha is an historically important city, as it was the site of the 1961 signing of the documents ceding independence from the United Kingdom to Tanganyika, the original name of Tanzania.  When Zanzibar also gained independence in 1963, the two countries merged to form the modern nation of Tanzania.  Arusha was also appointed by the U.N. to host the International Criminal Tribunal for Rwanda following the horrible civil war and genocide there in 1994.  Arusha continues to hold the International Residual Mechanism for Criminal Tribunals.

We started our day with breakfast at the lovely Moivaro Arusha Lodge where we greeted the two new members of our tour group and met with Cosmas, our guide for the rest of our tour.

Moivaro Lodge is in the outskirts of the city.  We slept in individual bungalows tucked here and there in the jungle.  I was thrilled to discover monkeys jumping through the trees above us, and got a rather different sort of thrill by the huge line of large red ants that crossed the path directly in front of our bungalow.  It was fascinating to see how they created a protective corridor with their bodies while other worker ants and large soldiers marched through the middle taking bits of food to their burrow.

Here is a short video of their busy little highway:  Ants in Arusha  (If you received this post by email, the video may not be included.  Go to the website Travels With Robby to see all the videos in this and other posts.)

Happily, our group members were all in better spirits after our difficult trip from the Masai Mara the night before.  We met our other two driver guides, Ansi and Richie, divided into three groups, boarded our three Land Cruisers, and set out to explore Arusha.

We drove for several miles along a wide, pot-holed, dirt road with very little traffic control.  Alongside of this road were miles of road construction, mostly done by manual labor.  The city is building a brand new highway which our guide called "The Chinese Road,"  as China provided the plans, equipment, and engineers.  I could not help but think that America is missing out on an opportunity as China moves aggressively into Africa forming alliances and gaining access to resources.   I'm sure the highway will prove a great asset in the future, but during our visit, it was a mess, and it was a relief to finally reach a paved road again.


As we drove, Cosmas told us about the area.  He mentioned that Arusha has one million people and five traffic lights.  It WAS crowded - and my first eye-opening look at "the third world."  All along the highway, shabby buildings housed local businesses.  There is no building code.  Houses cobbled together out of sticks and plastered with mud are common.  The luckier few might have a house of grey cinderblock.  All of the buildings we saw lining the highway into town stood on a swath of red dirt and the dust covered everything from the children to the foliage behind the buildings.

This main highway was also lined with thousands of people going about their lives - families shopping at the little markets, groups on motorcycles gathering to talk, women carrying baskets of goods or buckets of water on their heads.  The women were often dressed in long bright floral skirts and elaborate headdresses.  To my western eyes, it was lovely and exotic.

A number of people were dressed in their finery, and Cosmas explained that, although most of the population is Christian, there are also many Muslims who were today they celebrating the last day of Ramadan.  I loved the women's clothing.  Whether Christian or Muslim,

As we got into downtown Arusha, the buildings became more modern and familiar. We learned that the buildings painted pink are government offices.  Our first stop was at a local grocery store where we browsed for a few minutes.  The store was more a department store, with appliances and clothing as well as food.
Next we pulled up in front of a plain little storefront named "Safe Water Ceramics of East Africa" where we learned about a fantastic family creating clay water filters to bring safe water to the people of Africa, where 46% of the people do not have access to clean water.  A sweet young woman explained the process, using the red clay of the region mixed with sawdust and colloidal silver to create a ceramic filter that draws the impurities out of dirty and dangerous water.


After describing the process, she introduced us to her father, Mesiaki Kimerei, a master potter who learned this process and began manufacturing the filters for rural areas of Tanzania.  (You can read the history of his journey at the link above.)   What a wonderful operation!


Several of us purchased filters which will be donated to needy communities and schools, and Rob and I plan to continue to support them in their mission.  If you would like to join us, the contact information is here: 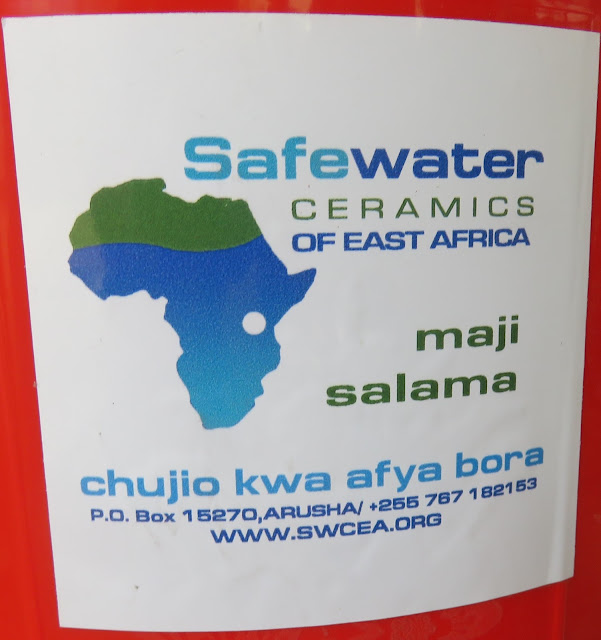 We stopped for a yummy  buffet lunch at the Mount Meru Game Lodge, which delighted us with the sight of their resident animals, and the visiting monkeys, including a rare black and white colobus monkey high in the trees above.


The lunch stop also introduced us to another service organization, Shanga, which provides training and support to the disabled.  The workers use recycled materials to create beautiful jewelry and other items that are sold in the gift store.  As we ate, our hostess and one of the workers, a cheerful deaf man, taught us some sign language, then we toured the facility to see how he makes glass beads from recycled bottles, while others turn the beads into jewelry, and make necklaces or weave scarves out of recycled fabric.  It was heartwarming to know that our souvenir purchases were supporting such a worthwhile organization!


It had been a very full but enlightening day!  We returned along the very dusty highway to Moivaro Lodge for dinner and to pack up for our journey the next day to the animal-filled woods of Tarangire National Park.

Stay tuned for the next installment!!!