Our tour group departed the Evergreen Lauren Hotel and Bangkok early this morning and headed west toward Ratchaburi and Kanachaburi Provinces.  Our first stop was the famous Damnoen Saduak Floating Market.
Our language lesson on the bus this morning was designed to help us do our own shopping in the busy market:  "khob khun" for thank you, and "mai" for no.  (An important word to know for dealing with persistent vendors!)  The market consists of several canals cutting like roads through lines and lines of stalls of merchandise.  While I'm sure that it was once a village market where local people went to meet and shop for fresh produce and goods, the market has become a huge tourist draw and most of the stalls now are filled with tourist products like the cool baggy pants founds everywhere in Thailand, hats, trinkets, little statues, and postcards.
After using the - ummm, interesting - restroom facilities, our tour members boarded several of the small wooden boats that fill the river and floated out from the covered docks into the open canals.  As we were among the earliest tourists to arrive, the first half of our visit was fun and fascinating.  Vendors on boats floated by, some cooking fresh food and meats right on their boats, others selling fruit to the tourists as they passed. Rob, of course, enjoyed his favorite drink of fresh coconut water.

By the end of our excursion, other tourist boats filled the canals like a traffic jam on the L.A. freeways and there were times when we came to a complete halt.  I found it a shame that it had become so touristy - although, since I was part of the problem, I did not have reason to criticize.  This is one of the dilemmas of a world in which so many of us have the privilege of traveling.  You just have to look past the crowds and enjoy the experience!
After our boat ride, we had a few minutes to wander around the extensive "on-land" market that surrounds the canals.

Back on the bus, Yo described a variety of tropical fruits she had picked up in the market:  sapodela, lady finger bananas, egg bananas, rose apple, guava, and jack fruits.  As she described them, she handed out tasty samples of each.  We topped off the fruit with samples of a sweet and salty Thai "taco," and Ka-nom-sai-sai, a Thai dessert of tapioca and rice flour stuffed with coconut flesh and cooked in a banana leaf.


We drove deeper into the countryside to the city of Kanchanaburi where we visited the War Cemetery.  This cemetery honors the memory of the prisoners of war who died while building the Burma-Thailand Railroad.  There are 6,982 POWs buried here, mostly Australian, British, and Dutch.  (Americans who died here were returned to the United States.)  It was very moving to browse through the cemetery and read the loving inscriptions on some of the gravestones.

Our trip into World War II history continued through the rest of the day.  Our lunch stop was on an outdoor patio overlooking the famous Bridge over the River Kwai.  (Kwai, we learned, is pronounced to rhyme with the a in hat or quack, rather than with a long I sound.)  Lunch included one of my favorite Thai dishes, mee krob, a sweet crispy noodle.


Like the market, the bridge has become overrun with tourists, but Rob and I walked all the way across, past the big crowds, to a replica of one of the camps where it was much more peaceful and we could pay our respects to the prisoners who had given their lives to work on the ill-fated railroad.


This collection of buildings stood on the other side of the river.  I'm not sure if it was a temple or a park, but I enjoyed the large statue and strange colorful pillar of serpentine dragons.

The last stop of the day was the most emotional of all - a visit to Hellfire Pass.
The Japanese were determined to build a railroad from Burma to Thailand through mountains and almost impenetrable jungle.  Their prisoners of war were forced to do the labor on this railway, and the Konyu Cutting was one of the most difficult spots as the men had to cut a pass through hard rock.  A poster in the Hellfire Pall Museum tells the story of the worst part of this sad episode:

From April 1943 the work pace increased to a frenzy as the Japanese strove to meet the revised deadline for completion.  Prisoners of war and romusha were made to work punishing 15 to 18 hour shifts day and night, struggling to meet the demands of their captors.

At night, work parties continued by the light of bamboo torches and bonfires.  At Konyu Cutting, the eerie flickering light and the shadows of gaunt, starved men working in the cutting led to its infamous nickname, "Hellfire Pass." 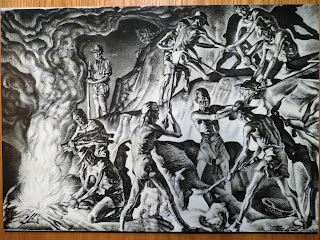 After visiting the small museum, Rob and I walked down the trail through a bamboo forest to the Konyu Cutting itself.  There were still traces of the doomed railroad visible in the trail.  Along the walls of the pass were plaques and remembrances of the men who had died there, including one showing one of the men who died here and his wife, who died many years later, saying "Reunited At Last."  I got a little teary thinking about the agony of the men who worked and died here.

Our final destination was the Hintok River Camp, a compound of large tents on platforms above the lovely forested River Kwai.  Rob and I settled into our big comfortable tent and enjoyed the outdoor buffet dinner served under torch lights on the grounds of the camp.