When Rob and I visit the Monterey Peninsula, our trip isn't complete without a hike around Point Lobos State Park.   Pacific Grove is often covered with morning clouds or fog, so when we woke to sunny blue skies on Tuesday morning, we knew this was the right day for our hike!
Australian artist Francis McComas called Point Lobos "the greatest meeting of land and water in the world," and I certainly don't know of any coastline that is more spectacular than this one.  Every season is beautiful here.  I especially love the warm fall days when the air is filled with the scent of sage, but this spring trip was a treat for the eyes, as the wildflowers were blooming along every trail.

Rob and I set out on our favorite route, following the trails that take us all the way around the perimeter of the park.
From the park entrance, we headed down the Carmelo Meadows Trail, then turned on the Granite Point Trail toward Whalers' Cove, where the whalers of the 19th century hunted the grey whales that migrated near the shore here.  You can read more about the history of the whalers here:  History of Whaling at Point Lobos.

At the far end of the bay, we headed up the stairs to the North Shore Trail, one of the most beautiful trails in the park.  It winds up the steep, rocky cliffs past tangled webs of gnarled old Monterey cypress trees.  From several overlooks and through the trees are views of the deep blue Pacific crashing against the rocks below.  More harbor seals took advantage of the few sandy coves along the shore to rest and care for their new pups.
After a long climb through the cypress forest, we suddenly dropped down into the open meadowland with views of the Big Sur coast all the way down to Point Sur, 20 miles in the distance.  We stopped for a minute to stroke the pelts of the seals and sea otters that are on display.  In the past, sea otters were hunted for their soft, lush fur, but the Monterey Bay area, including Point Lobos, is now a marine sanctuary, and the otter populations have made a good recovery.

The next stop was along the Sea Lion Point Trail to Sea Lion Point.  The sea in front of this point is called the Devil's Cauldron with good reason.  The point is dotted with small rocky islands with waves from the open ocean beyond crashing against the rocks.  The park is actually named for those rocky islands - Punta de los Lobos Marinos - the Point of the Sea Wolves, and we can usually hear the barking of the "sea wolves" on the far-away rocks even over the sound of the sea.
Point Lobos always holds surprises and this time was no different.  The sandy beach at the bottom of the point is usually dotted with a few small harbor seals, but this year, the park staff had to close off the trail to the point, as the beach has been invaded by hundreds of large sea lions.  A ranger explained that these were migrants from the Channel Islands off of the Santa Barbara coast who had come north seeking food.  The cold water fish that make up their diet have been moving north as the southern waters have been warming.
Rob and I continued along the Sand Hill Trail to the South Shore Trail along the lower sandstone cliffs and tidepools.
After a quick rest stop at the China Cove picnic area, we climbed up the Bird Island Trail to one of my favorite spots in the park, China Cove, a lovely little inlet of clear blue-green water and a white sandy beach. Another surprise!  The harbor seals that had been displaced from the beaches of Sea Lion Point had moved onto the sands of China Cove.
Above Gibson Beach, we turned back along the South Plateau Trail through the Monterey pine forest that covers the inland part of the park.
The park staff had been doing quite a bit of maintenance on the trails following the winter storms.  There are several trails through the interior of the part that we have never explored, and we discovered a brand new trail, the Lacy Lichen trail, at the very end of our journey.  A new trail is a good reason to return again, but even without it, we never tire of visiting this beautiful park.

For those of you who are interested, here are more of the wildflowers we saw during our hike. 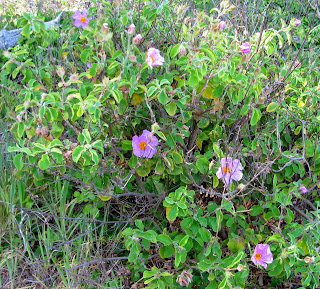 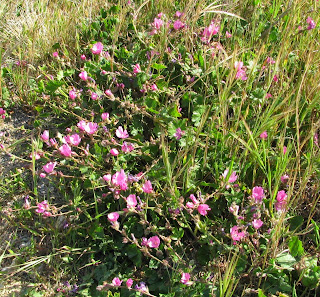 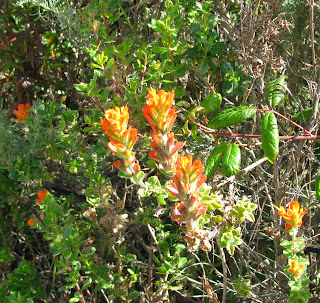 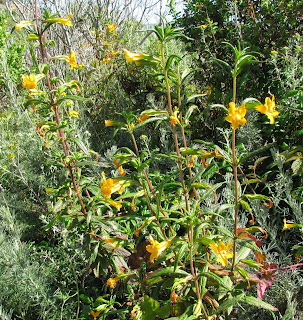 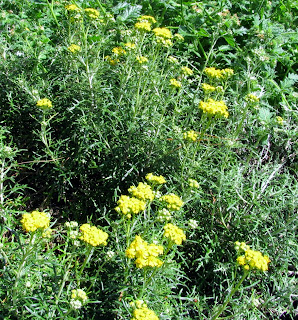 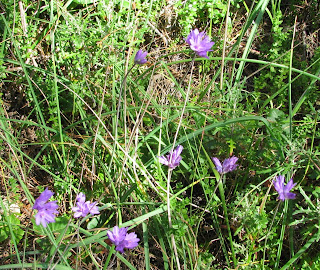 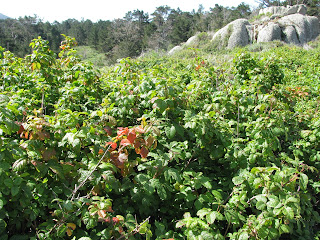 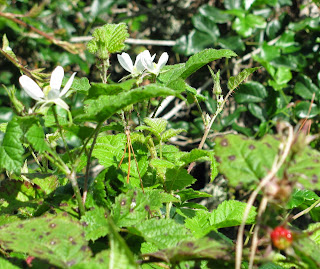 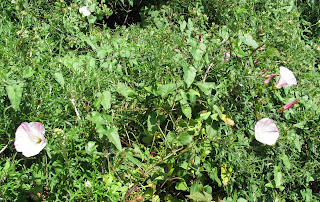 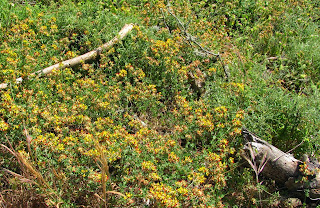 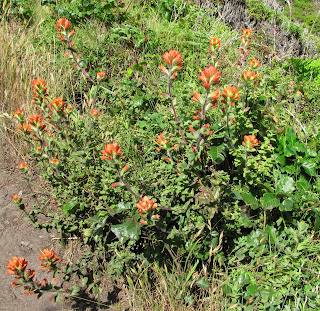 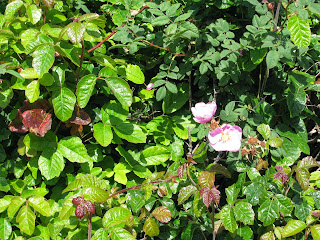 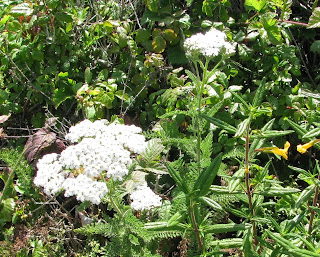 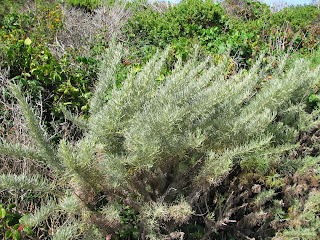 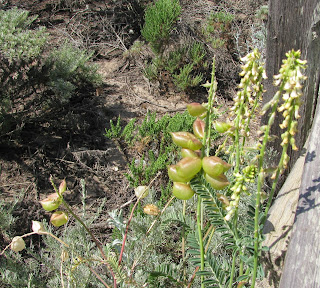 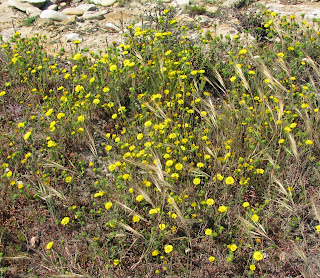 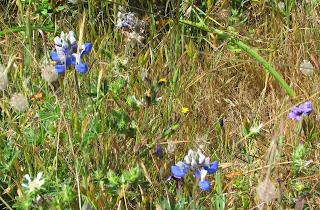 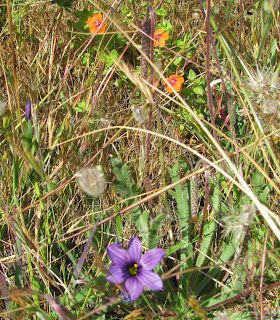 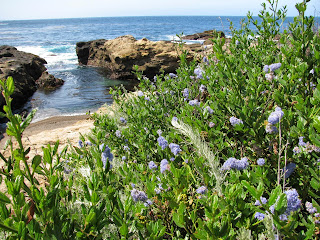 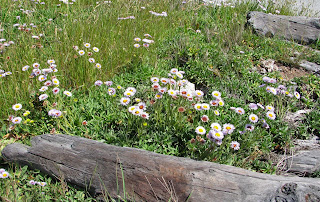 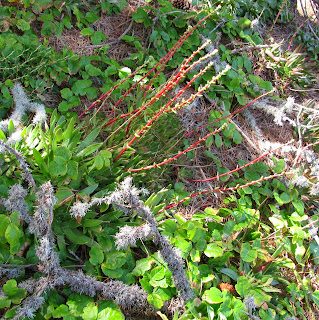 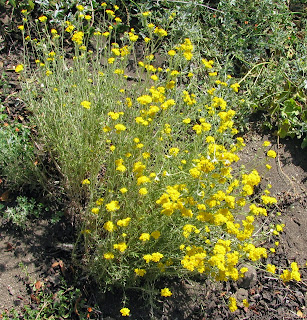 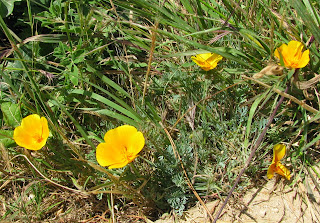 Really enjoyed your descriptive narrative, Joan, as well as your lovely photos. Hiking Point Lobos State Park is something Judy and I would enjoy, too. Thank you. xoA