Well, this wasn’t the trip that we had envisioned.   The plan was four days on Santorini, a seven-day cruise of the Greek Isles, and three days in Athens.   But in spite of an unexpected calamity, we actually did enjoy our four days on the beautiful island of Santorini.  We arrived on the island on a rainy Tuesday, but woke on Wednesday to beautiful blue skies and perfect temperatures. Our hotel, the Antilez Suites, looks out over the ocean-filled caldera of this ancient volcanic island, and we ate breakfast on the patio with views of the white and blue towns of Fira to our left and Firastefani to the right...and little Oia town way out on the tip of the island.

Wednesday morning, we just browsed the tourist shop-filled little lanes of Fira and Firastefani, which were crowded with visitors from the five cruise ships anchored in the caldera below.

In the town square, we discovered  the Archaeological Museum where we saw some of the artifacts preserved from the ruins of Akrotiri, an ancient town that, like Pompeii, was buried by the ash from the Santorini volcano. We had lunch at Salt and Pepper, a wonderful local restaurant with a delightful hostess. She walked around the restaurant, chatting animatedly with all the patrons...and when the customers were served their food, she took their photo for a big book she keeps. She bragged that she remembers every customer and that we are her family. We followed lunch with a pedicure for me and a massage for Rob at a local establishment. 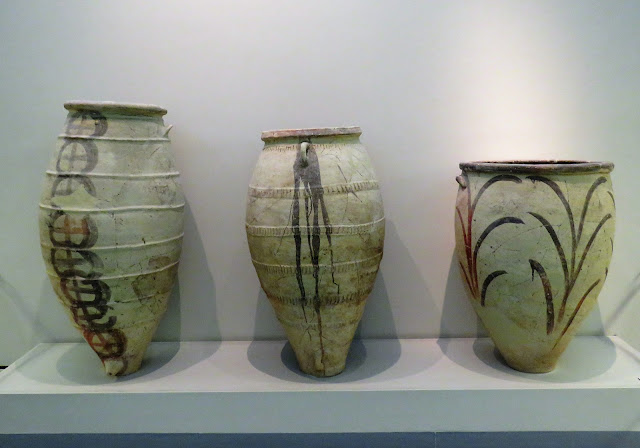 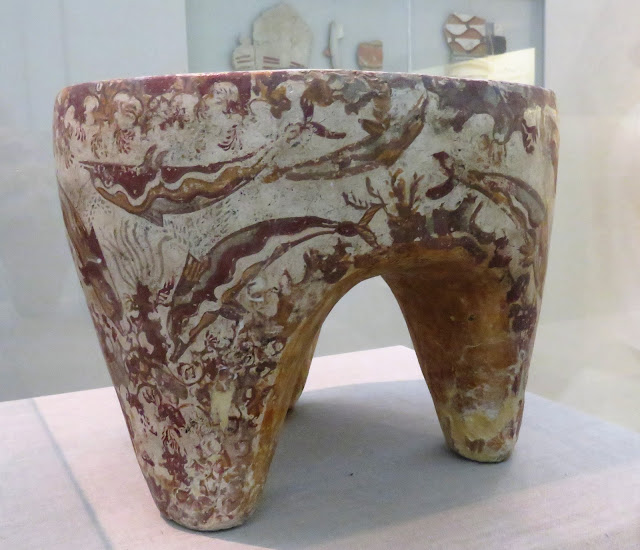 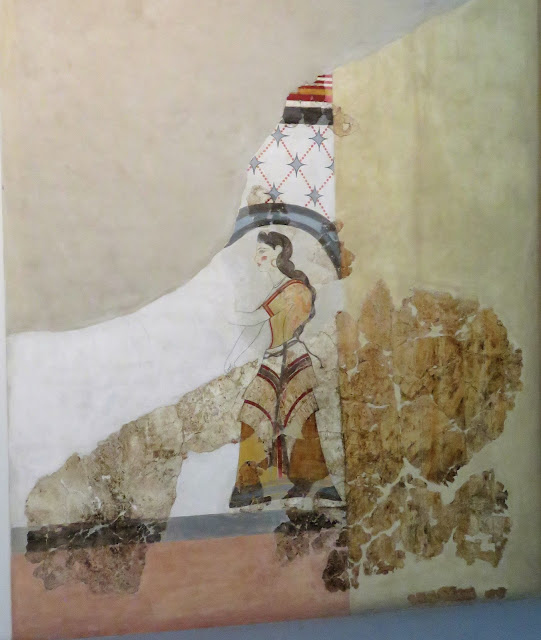 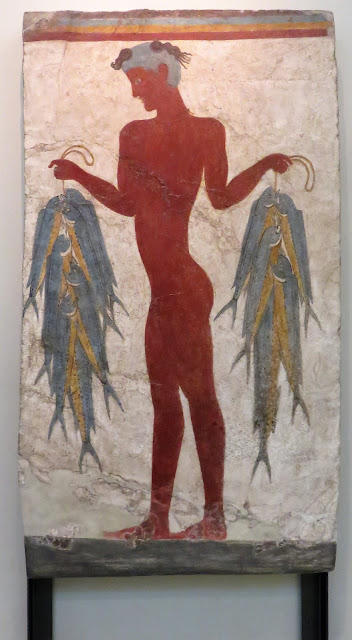 That afternoon, we decided (haha!) that it would be an interesting experiment to check out the Greek health care system.  Rob went for a dip in the hotel pool...and upon emerging from the pool, slipped on wet marble stairs and came down hard on the back of his shoulder. (And thank goodness he didn't come down on his head! This all could have been much worse.) I was in our room when one of the staff came knocking on the door and said with her limited English, "He has fallen!". My heart pounding, I hurried down the stairs to find my poor husband stretched out on the hard rock moaning in pain.  The hotel manager and some staff members, and an English guest who was a nurse, were clustered around Rob.  They had already placed towels under his side to prop him up and were shading him from the bright afternoon sun with an umbrella. The ambulance had already been summoned.  Everyone could not have been more wonderful.
Now is a good time to add that, if you plan to have an accident, Santorini is NOT a good place to choose to have it! The hotels are clustered along a high cliff, and there are few actual roads. The only way to reach our hotel is along the uneven pedestrian trail along the cliff, so once the EMT had Rob all taped up like a mummy to secure his arm, it was the choice of bouncing along on a stretcher or walking. His legs were fine, so he chose to walk...but it was a difficult walk! And then the ambulance had to navigate through the narrow streets past hundreds of tourists to get him to the hospital down on the flat part of the island.
We really hoped it was just a dislocation of his shoulder, but the x-rays revealed a displaced fracture of his humerus very near his shoulder, and the doctor told us that it could require surgery and advised us to have it evaluated by Rob's own doctor. That was the moment when our vacation plans flew out the window. 😥  Rob was trussed up in an "immobilizer"...a harness and sling. He will wear it until he sees the orthopedic surgeon on Monday, and it does help to alleviate the pain

Antony, our hotel manager, stayed with us every step of the way, following the ambulance, translating when needed, and driving us back to the hotel, stopping by the pharmacy for me to pick up the pain medication on the way. He has continued to take care of us, helping me contact the airlines to arrange our flights home, making sure we got meals, and more.
The first night after the accident was pretty awful. Rob was in bad pain - and pretty helpless with only one arm, so I was up with him, helping him with whatever he needed. But by Thursday, the meds were beginning to kick in and Rob’s pain was much diminished.  The weather was very strange all day on Thursday. It was sunny and fairly warm, but there was a wild wind – the strongest I’d ever experienced since Hurricane Carla in 1961!  Rob and I took a short walk to get lunch, then he rested nearly all day while I went out to explore the a bit more, but just walking along the cliff-top trail was an adventure in the strong gale! 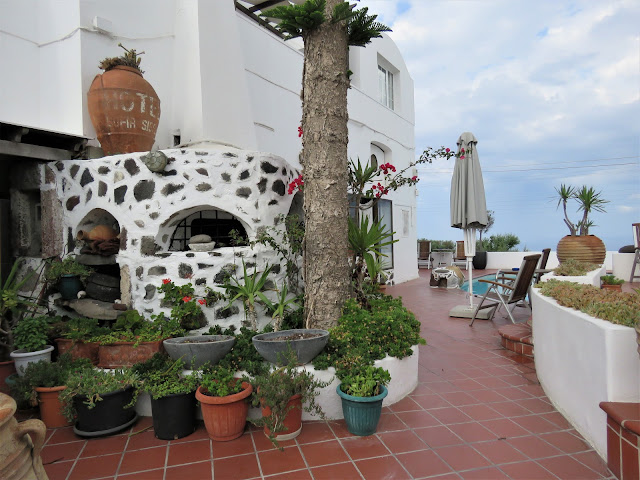 We had made dinner reservations back at Salt and Pepper, so I walked by to cancel them and told the hostess what had happened. Based on her behavior at our good lunch, I was not surprised at her reaction. She truly did treat me like family, looking genuinely shocked and sorry, and hugging me like a mother. I felt like crying just because everyone has been so kind!

Thursday night was SO much better than the night before.   Rob and I both slept well, and Friday morning, he actually felt well enough to go with me to the ruins at Akrotiri, which is known as the Minoan Pompeii.  Like Pompeii, it was covered – and preserved – by volcanic ash in a huge eruption in about 1627 B.C.  The buildings are not as well-preserved as those we saw at Pompeii, but the site contained many treasures and clues to the lives of the bronze age Minoan people – beautiful wall frescoes, decorated pots, and even a sophisticated sewage system with in-home bathrooms!

We too a taxi to Akrotiri at the far end of Santorini and browsed around the site, which is enclosed in a covered building to protect the excavation.  It is not nearly as extensive as Pompeii, but it is estimated that only about 3% of the site has been excavated!  I wonder what other treasures might be found in the future! 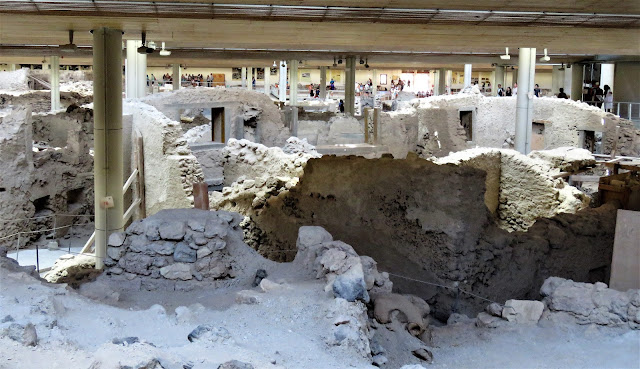 Just below Akrotiri was a little beachside cafe, so we walked down for smoothies while waiting for our taxi to arrive.

We returned to the hotel for lunch on our balcony with its stunning views, then Rob napped again while I once again walked along the cliffs enjoying the spectacular views.  We spent Friday evening packing our bags for the unexpected trip home…but we will be returning with many memories – mostly happy and one not so happy – and with a determination to return to Greece to finish our explorations! 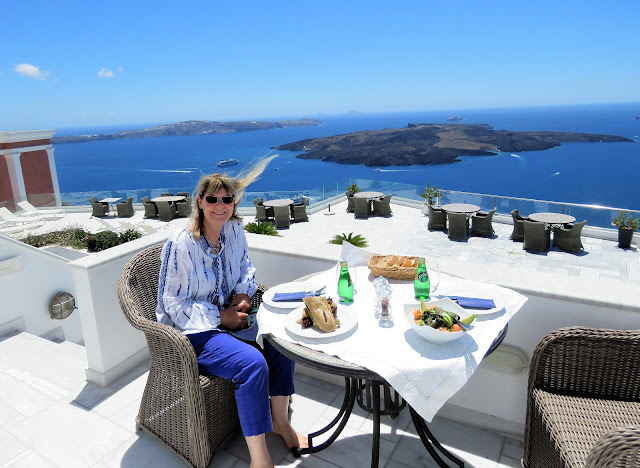 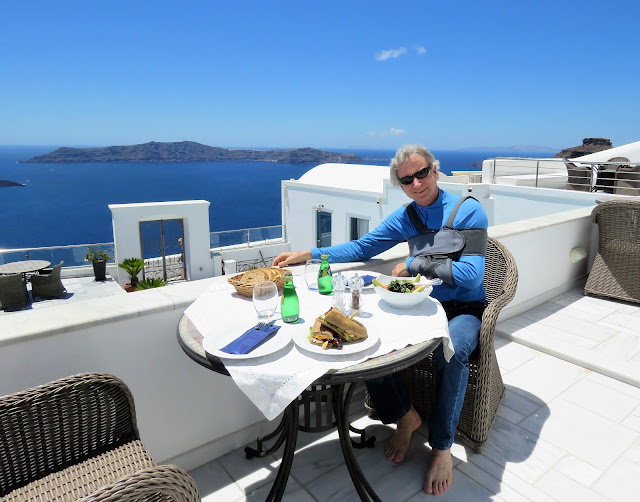 OHHHH MY GOSH! What lovely beautiful photos and what a story! Sending you positive thoughts for safe travels and no surgery for Rob!

Thanks for sharing--the pictures are fabulous. Hope Rob has a speedy recovery! Safe travels home.

Beautiful photos, Joan. After Akrotiri, we visited the museum in Fira so we have some of those same photos. I'm so glad Rob's feeling better. Wishing you safe travels home and seamless care for Rob when you get there. Big hugs, xoA